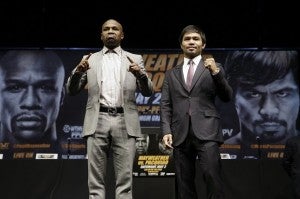 MANILA, Philippines – Boxing as big business did not escape the eye of independent journalist Emil Guillermo, who posted on Twitter: $300 million is the estimated gate for this fight between Manny Pacquiao and Floyd Mayweather Jr.

“Surprisingly, Mayweather was so humble during the press conference. Was he faking?” said 33Sambuang.

Netizen Anthony Daguno tweeted: “LOL pacquiao’s facial expression in that face off shows that he isn’t worried at all unlike that of mayweather’s.”

Internet user GuyWhoCares said: “He is trying to use what Mosley did—being friendly. Mayweather is hoping that Pacquiao will do the same—friendly during the fight. Manny will not bite. It’s a sure ploy by Mayweather camp.”

A certain IntendoPrinceps posted, “This is the best random advertising for the Philippines of all time.”

Netizen @openUn8ted rallied behind the Filipino boxer: “Win or lose, we are behind you @MannyPacquiao! U made them know who Pinoys are. We love you!”