Why ‘trained’ giant rats are being hailed in Mozambique 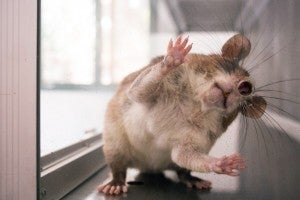 Maputo, Mozambique–Giant rats may strike fear and disgust into the hearts of homeowners worldwide, but researchers in impoverished Mozambique are improbably turning some of them into heroes.

At Eduardo Mondlane University in the capital Maputo, nine giant rats are busy at work — sniffing out tuberculosis-causing bacteria from rows of sputum samples.

These are no ordinary rats, as they have undergone six months of training in Tanzania. Their most distinguishing asset is their impeccable sense of smell.

Placed inside a glass cage, a rat darts from sample to sample, then stops or rubs its legs, indicating that a sample is infected with a TB causing bacteria.

Once the task is complete, it is given a treat through a syringe for a job well done.

“Within 30 minutes, the rat can test close to a hundred samples, which normally takes a laboratory technician four days,” said Emilio Valverde, TB program director at APOPO, the organization leading the research.

The project, which started in February 2013, has brought hope to thousands of TB sufferers who sometimes receive false results and test negative using the standard laboratory system.

In 2006, tuberculosis was declared a national emergency in Mozambique, with 60,000 people in 2014 said to be infected, according to the ministry of health.

Samples delivered to the university for testing are collected from 15 health centers across Maputo.

Belgian group APOPO is planning to expand the program to other parts of the country, while working on getting the system approved by the World Health Organization.

The organization claims rat testing is more cost effective than other conventional methods.

The cost is lower compared to rapid diagnostic test GeneXpert, which costs up to $17,000 per device, setting the state back between $10 and $17 per test.

The kitten-size rats are also used by APOPO to detect landmines by sniffing out explosives.

They are light enough to cross terrain without triggering the mines, and are followed by de-mining experts who reward the rats with bananas.

The rats weigh up to 1.5 pounds and are said to be “easier to catch and train” — according to Valverde.

Samples pointed out by the rats to contain TB bacteria are then sent for further tests using fluorescence microscopy, a more sensitive laboratory technique.

The results are sent back to health centers, allowing patients to start treatment early.

Although TB is a treatable disease, in underdeveloped countries like Mozambique it can be deadly if left untreated and is particularly harmful to people living with HIV.

Mozambique is one of the countries worst affected by TB and 1 in 10 adults is HIV-positive.

With World Tuberculosis Day being marked on Tuesday, the Mozambican Ministry of Health said it was cautiously monitoring the APOPO work.

“This technique has to be compared to others that are available and already WHO approved, such as GeneXpert or LED microscope,” said Ivan Manhica, who heads the national program for tuberculosis at the health ministry.

WHO: Together we can beat TB