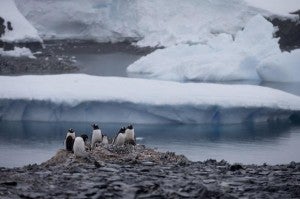 Penguins and glaciers in the Antarctica. AP FILE PHOTO

WASHINGTON–The ice floating around Antarctica has thinned by nearly 20 percent, according to research published Thursday, depleting the bulwark that prevents the permanent collapse of glaciers covering the southern continent.

The study, based on satellite measurements between 1994 and 2012 by the European Space Agency, sheds new light on how Antarctic ice responds to climate change.

The report was published in the online version of the journal Science.

Ice barriers have an average thickness of between 400 to 500 meters (1,300 to 1,600 feet) and can extend hundreds of kilometers off the coast of Antarctica.

If the ice becomes too thin it would allow the permanent glaciers to slip into the ocean and start melting, sharply increasing the rise of ocean levels.

Researchers found that the total volume of Antarctic ice changed little between 1994 and 2003, but after that point melting markedly accelerated.

Ice in western Antarctica declined throughout the study period. A slight increase in ice thickness was observed in eastern Antarctica before 2003 when rapid melting began, leading to an 18 percent reduction of thickness compared to 1994.

“Eighteen percent over the course of 18 years is really a substantial change,” said Fernando Paolo, a researcher at the University of California, San Diego.

“Overall, we show not only the total ice shelf volume is decreasing, but we see an acceleration in the last decade.”

If the rate of thinning continues, the ice shelves could lose half of their volume over the next 200 years, the researchers calculated.

For Professor Andrew Shepherd, director of the Centre for Polar Observation and Modelling at the University of Leeds, the melting trend is “a real concern, because such high rates of thinning cannot be sustained for much longer.”

A study published in December of 2014 showed that the rate of glacier melting had tripled in the Antarctic region that saw the most ice thinning over the last decade.

Glaciers in the Amundsen Sea of west Antarctica are losing ice faster than anywhere else on the continent and are the largest contributors to the rise of sea levels, researchers said.

Two other studies published in 2014 concluded that the melting of large glaciers in western Antarctica, which have enough water to raise sea levels at least one meter, will accelerate with global warming and the melting is likely irreversible.