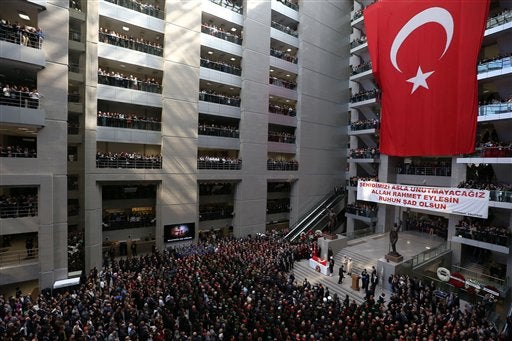 Some thousands of people attend the funeral ceremony for Turkish prosecutor Mehmet Selim Kiraz inside the main courthouse where he died on Tuesday in Istanbul, Turkey, Wednesday, April 1, 2015. Istanbul’s police chief, Selami Altinok said police had negotiated with the gunmen for six hours before the violent end of the hostage situation, resulting in the death of Kiraz and two gunmen who took him hostage. AP

ISTANBUL — Turkey blocked access to social networking sites Twitter and YouTube for several hours on Monday over photos showing a militant pointing a gun at a prosecutor who died last week in a failed hostage rescue operation. Turkey also threatened to ban Google over the images.

A spokesman for President Recep Tayyip Erdogan said a Turkish prosecutor had ordered Internet providers to block the sites. The request stemmed from postings of photos that showed militant Marxists pointing a gun at the prosecutor, Mehmet Selim Kiraz, who died in a shootout between police and the Marxists who were holding him hostage.

Government officials have blasted Turkish media for posting the images, which they have called anti-government propaganda. Kiraz, was shot in the head during the standoff and died in a hospital soon after.

A government official said Turkey decided to lift the ban on Twitter in the late afternoon after the company agreed to remove all images of the prosecutor and telecoms authorities verified that it had done so. The official spoke on condition of anonymity because she was not authorized to speak publicly on the issue.

Anadolu said access to YouTube was restored in the evening after it agreed to abide by the Turkish court order.

Turkey however, then threatened to ban Google unless it removed search results showing the slain prosecutor’s images.

The journalists group, Turkish Press Council, said that while it understood the authorities concerns over the publication of the prosecutors’ photographs, it said banning social media websites was in conflict with democracy.

“It is meaningless to totally shut down social platforms — which contain billions of useful information — to the use of the Turkish people because of some unsuitable content,” the group said.

Users meanwhile were sharing information on how to get around the ban on the Internet.

Last year, Turkey blocked access to YouTube and Twitter after audio recordings of a secret security meeting or tapes suggesting corruption by government officials were leaked on the social media sites. Turkey’s highest court, however, overturned the bans, deeming them to be unconstitutional.

Many tech-savvy users, including former President Abdullah Gul, had found ways to circumvent the bans both on Twitter and YouTube while they were in place.