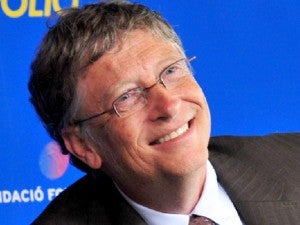 Senior Officials of the Bill and Melinda Gates Foundation (BMGF) have visited the International Rice Research Institute (IRRI) in Los Baños, Laguna to get updates on the food and nutrition programs the foundation has been supporting.

“We are thankful that the BMGF has come for updates on the food and nutrition security initiatives that they support,” Robert Zeigler, Director General of IRRI said in a statement.

“The foundation is a staunch partner in applying the best of science so that people in the rice-eating world will not go hungry,” Zeigler added.

The IRRI said senior officials including Pamela Anderson, Director of the Agricultural Development Program, and Gary Atlin, Senior Program Officer visited the site and had a tour at IRRI’s research facilities.

Scientists gave briefings to the BMGF officials on key advances, including the latest on climate change-ready rice and healthier varieties that aim to help solve micronutrient deficiencies, which afflict about 2 billion people globally.

IRRI scientists showed to the BMGF team experimental rice plots for the development of flood- and drought-tolerant rice.

IRRI said the stress-tolerant varieties hold the promise of improving the livelihoods of the world’s poorest farmers who till lands most vulnerable to climate change.

The Inquirer earlier reported that Microsoft cofounder Bill Gates had a six-hour “confidential” visit at the IRRI’s headquarters in Laguna.

Immigration sources have said that Gates arrived in Puerto Princesa City on April 4 on a private jet with US registry number N887WM.

The American billionaire has evaded the public until he was sighted at the IRRI headquarters on Wednesday morning.

IRRI is a major grantee of the BMGF.