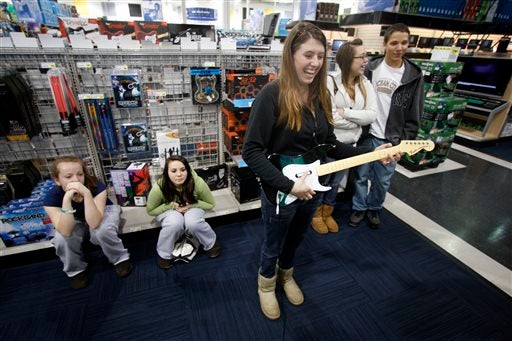 In this Nov. 27, 2009 file photo, a girl plays the Beatles Rock Band video game at Best Buy on Black Friday, in South Portland, Maine. After a five year absence, “Guitar Hero” and “Rock Band” are planning a reunion tour in 2015 on the current generation of video game consoles. AP

SANTA MONICA, California— The publisher of “Guitar Hero” is readying a comeback tour.

“We said we would bring it back when we’ve got true innovation,” said Jamie Jackson, creative director at “Guitar Hero Live” developer FreeStyleGames, who previously worked on “Sing Party” and the “DJ Hero” series. “We wouldn’t have come back if we didn’t think we were giving you a new experience. We genuinely feel like we’ve nailed it with innovation.”

“Guitar Hero Live” will cast players as an up-and-coming guitarist in a fictitious band. Instead of playing along with computer-generated characters on screen, wannabe rockers will see a first-person view of their band mates and audiences portrayed by human actors. The virtual crowd will boo or cheer players on, depending if they’re hitting the right notes.

“We want you to feel like a rock star again,” said Jackson. “We want to put you on stage, whether it’s in front of 100 people, 1,000 people or 100,000 people. We want you to experience what it feels like to perform on stage. That’s why we’ve turned the camera around and made it first person. As we were working on this, we actually code-named it ‘Stage Fright.'”

Despite featuring music from such artists as the Rolling Stones, Ed Sheeran and Green Day, “Guitar Hero Live” will forgo digital likenesses of real musicians in favor of actors portraying phony band members. Jackson declined to specify why the game’s made-up acts would sound just like such real-world bands as the Black Keys, Fall Out Boy and the Killers.

FreeStyleGames’ other major switch-up is adding another row of buttons to the top of the guitar’s neck. They eliminated the series’ color-coded, five-button system in favor of mirroring icons displayed on screen, with guitar picks pointing up and down. Jackson said the new six-button configuration would provide veteran players with a bigger challenge. 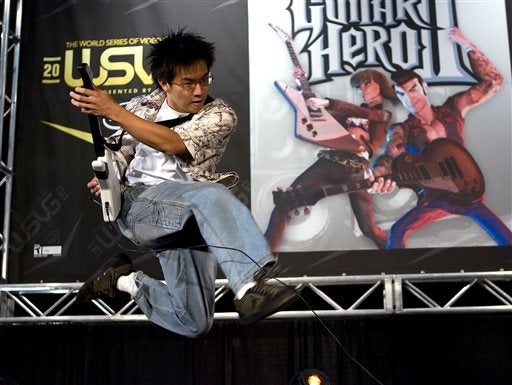 In this July 7, 2007 file photo, Freddie Wong, 21, of Seattle, Wash., plays Guitar Hero II on stage at the World Series of Video Games, in Grapevine, Texas. After a five year absence, “Guitar Hero” and “Rock Band” are planning a reunion tour in 2015 on the current generation of video game consoles. AP

“When you come back to something as much-loved as ‘Guitar Hero’ and start (expletive) with it, people get a bit nervous,” noted Jackson. “The first time even I saw it, I wondered if we were trying to reinvent the wheel, but I remember when we were playing with the prototype, I was thinking, ‘Holy (expletive). There’s something here.’ It proved itself.”

For the game’s online mode, FreeStyleGames has created a music video network dubbed “GHTV.” The original mode will allow players to compete against each other — online or in-person — against the backdrop of music videos. Jackson said “GHTV” was inspired by streaming services, and access to it will be included in the game’s $99.99 price tag.

During its prime in 2009, the “Guitar Hero” series topped $2 billion in sales. The genre was credited with inspiring a new appreciation for rock among millennials who didn’t grow up with the Beatles, Aerosmith or Van Halen. Eventually, popularity waned and Activision abandoned the franchise in 2011 after the release of “Guitar Hero: Warriors of Rock.”

“For us, five years is an eternity,” said Tyler Michaud, director of product management at Activision. “With the new cycle of consoles, it felt like the right time to return. Nothing about it is analogous to the old ‘Guitar Hero.’ The note tracking, guitar and visuals are all different, and ‘GHTV’ is an all-new concept. It’s a completely new game from the ground up.”

The “Guitar Hero” revival follows last month’s tease that “Rock Band” developer Harmonix is similarly bringing back its own performance series, which added keyboards and drums to the mix. Unlike “Guitar Hero,” Harmonix said “Rock Band 4” would seek to be fully backward compatible, meaning previously purchased songs and controllers could be utilized in the new game.

“It’s a mountainous chore on both the hardware side and the music side,” said Alex Rigopulos, chief creative officer at Harmonix. “But it’s incredibly important to our fans who invested in ‘Rock Band’ in the last console generation, and it’s a request we continually hear: ‘Please make “Rock Band 4,'” followed by ‘Please make my controllers and music compatible.'”