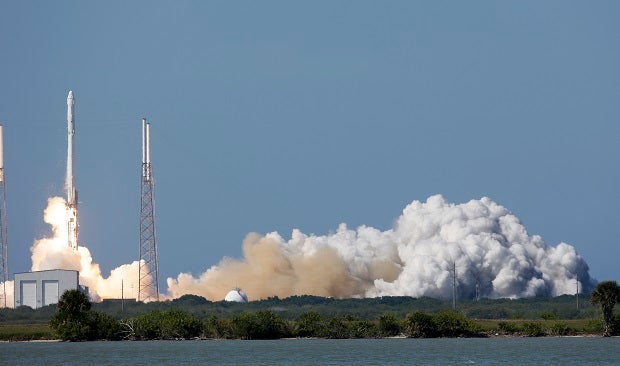 The Falcon 9 SpaceX rocket lifts off from launch at the Cape Canaveral Air Force Station in Cape Canaveral, Fla., Tuesday, April 14, 2015. The rocket is transporting more than 4,300 pounds of food, science experiments and equipment for the six space station astronauts, including the first espresso maker bound for orbit. AP

CAPE CANAVERAL, Florida—SpaceX launched a shipment of groceries to the International Space Station on Tuesday, including the first espresso maker bound for orbit. But the private company’s third attempt to land the leftover booster on an ocean platform failed.

The first-stage booster rocket apparently landed too hard on the barge and tipped over.

SpaceX chief Elon Musk wants to reuse the rockets rather than discard them in the ocean to reduce launch costs. The company will try again in June on the next supply run for NASA.

“It’s not quite clear what happened,” said Hans Koenigsmann, a SpaceX vice president. “But certainly it needs more work in the next couple missions.”

Despite improvements to the booster and landing platform, Musk still had predicted a less than 50 percent chance of success for the latest effort. He and other company officials repeatedly stressed that the landing test was secondary to getting the Dragon capsule filled with supplies into orbit.

Indeed, NASA congratulated SpaceX on Tuesday’s “spectacular” launch, delayed a day by stormy weather. Unprecedented images beamed down from orbit showed the protective covering popping off the Dragon and the two solar wings unfolding, like a newborn chick. Even SpaceX officials were impressed. “That is such a phenomenal picture,” Koenigsmann told reporters.

The supply ship holds more than 4,000 pounds (1,800 kilograms) of food, science experiments and equipment for the six space station astronauts. At liftoff time, the orbiting lab was soaring over Australia. The delivery should arrive Friday.

“We watched live!” Italian astronaut Samantha Cristoforetti said in a tweet. “Amazing to think that in 3 days #Dragon will be knocking on our door.”

The specially designed espresso machine is for Cristoforetti, who has been stuck with American instant coffee since she arrived at the space station in November. The Italians in charge of the project hope to revolutionize coffee-drinking in space.

SpaceX, meanwhile, hopes to transform the rocket business by eventually landing the first-stage booster on a platform floating a few hundred miles off Florida’s northeastern coast, near Jacksonville. The ultimate landing site, once the operation is perfected, will be a former missile-launching site at Cape Canaveral Air Force Station.

The 14-story booster was programmed, following separation 2½ minutes after liftoff, to flip around and from an altitude of about 78 miles (126 kilometers) fly to the platform dubbed “Just Read the Instructions.” Tuesday’s data looked good at a quick glance, including the engine firings to slow the booster, which made the mishap all the more puzzling.

Until a boat with crew arrives at the scene, SpaceX won’t know what if anything can be recovered, Koenigsmann said.

The goal, a vertical touchdown, also eluded SpaceX in January and February. The steering fins ran out of hydraulic fluid on the first try, and the booster slammed into the platform and exploded. Rough seas scrapped the second shot. Improvements to both the booster and platform followed, but apparently were not enough.

This was the seventh supply run by the California-based company for NASA.

The Dragon — the only supply ship capable of returning items intact — will remain at the space station until around May 21.

NASA is eager to get the Dragon’s contents to the space station. The agency still has a month-or-two backlog for food and equipment in the wake of the October loss of an Orbital Sciences Corp. cargo carrier. The unmanned rocket exploded at liftoff.

The espresso maker was among the items delayed by the accident. It should have arrived in January, two months after Cristoforetti moved into the space station. With her departure coming up in just one month, she won’t have much time to waste unpacking the Dragon and cranking out the espresso. Twenty coffee packets are included.