Binary Sunset? Now that’s music that we haven’t heard in a long time.

The latest “Star Wars: The Force Awakens” teaser was released on April 16, 2015, sending fans into a predictable frenzy.

The opening scene pulls no punches, as the camera pans right to treat the viewer to the wreckage of a rebel X-Wing fighter and an Imperial Star Destroyer, presumably resting upon what could possibly be the desert planet of Tatooine as an unidentified vehicle speeds in the background (possibly the box-shaped landspeeder from the first trailer?).

Voices, faces and droids familiar to fans of the franchise were shown throughout the trailer. Harrison Ford reprises his role as famed smuggler Han Solo, albeit a bit longer in the tooth than before and his partner Chewbacca.

Though not explicitly shown, the robed figure with the bionic arm reaching out to the droid R2-D2 will likely be the original Luke Skywalker, Mark Hamill.

Artoo’s companion Threepio was nowhere to be seen, however. 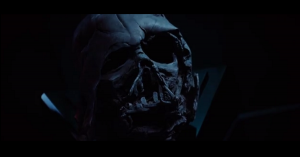 The ruined mask of Darth Vader was also displayed in the trailer.

A person hinted to be the Alderaanian princess, Leia Organa was also briefly shown, receiving a lightsaber from a yet-unidentified character.

Recurring characters from the first trailer: the stormtrooper known as Finn, played by John Boyega, the woman from the desert named Rey, played by Daisy Ridley and the masked villain Kylo Ren, whose unconventional lightsaber hilt lit up the internet after the release of the first trailer.

Old faces weren’t the only highlights in the trailer. A potentially new character was also featured, an imposing gray-armored stormtrooper wearing a black cape with red trimming walking down a hallway of Imperial design.

Social media was abuzz with people oohing and aahing at the combination of old Star Wars ship favorite, the Millennium Falcon, in modern computer-generated imagery (CGI).

The Falcon was shown in the trailer attempting to lose what seemed to be a redesigned TIE fighter within the colossal wreck of a Star Destroyer.

Star Wars: The Force Awakens is the latest movie in the famous franchise, and the first one not to be directed by creator George Lucas.

J.J. Abrams will be taking the directorial helm for The Force Awakens.

Star Wars: The Force Awakens is scheduled to be released in December. IDL