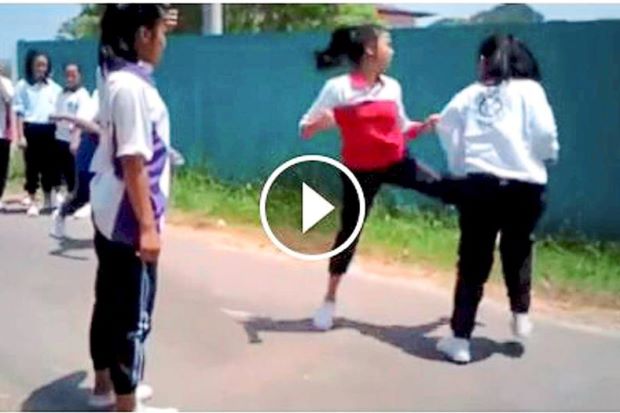 A catfight involving the schoolgirls aged 13 and 14 that was caught on video and which has since gone viral. The incident is believed to have taken place outside their school. Screengrab from The Star Online

KOTA KINABALU — A 14-year-old student sparked a fight among her schoolmates when she reported to a teacher that one of them had been kissed by a boy.

A 39-second video of the catfight later went viral on social media.

Penampang police chief Deputy Supt Azmir Abdul Razak said the student was punched by the girl she informed on in the fight which took place on April 1.

“The victim did not retaliate and only kept quiet when she was being shouted and hit at. That was when her friends were believed to have stepped in to help, causing the attacker’s friends to join in the brawl,” DSP Azmir said.

He said that the victim had informed the teacher of seeing the attacker snuggling up to a boy who kissed her on the neck.

The students’ parents and teachers did not lodge a police report as they wanted to settle the matter via the school’s disciplinary board, he added.

However, the four attackers aged 13 and 14 were brought to the police station at about 2pm on Tuesday to have their statements recorded after the video went viral.

“The girls were released on police bail later that evening. They will face disciplinary action from their school,” said DSP Azmir.

The girls from Kampung Kopimpinan and Kampung Limbaank here will most likely know their punishment within these few days while the victim is said to be receiving counselling after the assault.