Japan mulls 2018 moon landing, seeks to keep up with rivals 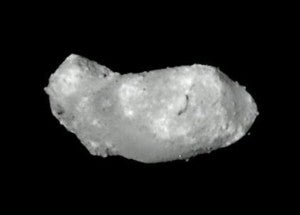 This Monday, Sept. 12, 2005 photo provided by Japan Aerospace Exploration Agency shows an asteroid named Itokawa photographed by the Hayabusa probe. On Wednesday, March 25, 2015, NASA announced it is aiming to launch a rocket to an asteroid in five years and grab a boulder off of it – a stepping stone and training mission for an eventual trip sending humans to Mars. Itokawa, 2008 EV5 and Bennu are the candidates for the mission. AP

TOKYO — Japan’s space agency is considering an unmanned mission to the moon by 2018 or early 2019, part of an effort to beef up aerospace technology and keep pace with China and other emerging powers.

The Japan Aerospace Exploration Agency, or JAXA, included the possibility of a lunar landing in the fiscal year that begins April 1, 2018, in its summary of moon exploration plans by Japan and other countries.

Japanese media reported Tuesday that JAXA presented the proposal to a government panel of the Ministry of Education, Culture, Sports, Science and Technology on Monday.

The agency still needs to win funding for the project. But it is raising hopes for a revival of space exploration. And the public broadcaster NHK showed satellite images of the Japanese islands, alit at night, and of the aurora borealis, or Northern Lights, as possible attractions for passengers of space flights.

Japan’s space program has achieved some breakthroughs on a shoestring budget, crimped during years of economic stagnation, but has focused in the past mainly on small scientific projects.

But JAXA underwent a recent reorganization and is seeking to expand its programs. The outline for international space exploration issued last week sets a goal for Japan to lead the U.S. and other countries in some areas in coming years.

The agency appears to be getting a boost from Prime Minister Shinzo Abe’s push to develop technologies with defense applications.

“There are areas of unlimited potential yet to be developed, and to boost controls of future threats it is important to minimize the power vacuum in space exploration,” the document says.

It forecasts increased competition for resources on the moon, and also risks from a possible “power imbalance” as Russia, China, India and other countries prepare for missions to the moon.

“A revival of competition and cooperation in moon exploration adds to the imperative for us to quickly achieve moon exploration,” it said, calling for consideration of an unmanned moon landing, among other goals.