Review: Getting your Apple Watch? Here’s how to use it 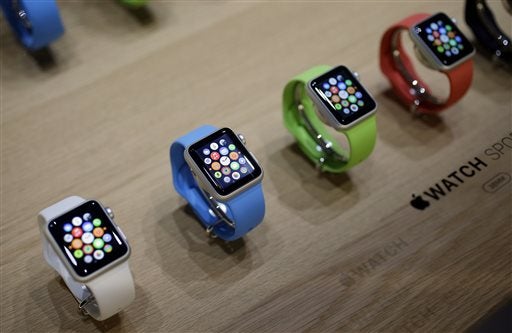 In this March 9, 2015, file photo, varieties of the new Apple Watch appear on display in the demo room after an Apple event in San Francisco. AP

If you haven’t ordered yours yet, you’ll have to wait a while. Apple’s retail stores won’t have them, nor will any other store in the US, with the company taking orders over the Internet only — for delivery as late as July for some models.

But if you were online to order at 3:01 a.m. ET on April 10, you’re in store for a new way of interacting with your digital life. A better way? I’ll need more time with the watch to say.

For now, I can offer some tips on using it:

Update your iPhone’s software before starting. You need at least iOS 8.2. You also need the password for your Apple ID account.

Select your language on the watch and open the Apple Watch app on the iPhone. Hit “Start Pairing” on both devices. Here’s where it gets fun: Use your iPhone camera to photograph the watch animation, which has an embedded code so the phone knows to connect to that specific watch. Follow the prompts on the phone app. At the screen for installing apps, choose “Install All” to get watch versions of apps already on your phone.

It took about 12 minutes for all my apps, contacts and calendar entries to sync. Use that time to watch video tutorials on your phone. 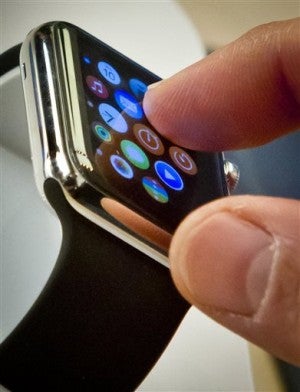 You can adjust watch settings by going to “My Watch” in the phone app. Don’t spend too much time at first. See how the watch fits in with your lifestyle. Initially, notifications on the watch will match those on the phone. If that gets annoying, customize the settings so that some notifications go to the phone only. For email, you can designate specific contacts as VIPs and have only their messages reach your watch.

The watch borrows many gestures and controls from the phone, but that isn’t always practical with a smaller screen. Getting used to the changes will take time.

— Lightly press the dial, known as the Digital Crown, to toggle between the watch face and the menu of apps. It’s also typically how you exit apps. Double press to get your most recently used app. A hard press gets you Siri, Apple’s voice assistant. Turn the dial to zoom, scroll or flip through menus. My instinct was to turn the dial like a knob, but it’s easier to slide your finger over it, like rolling the wheel on a toy car.

— The other button gives you quick access to friends — favorites from your phone’s contact list and what you add under “Friends” in the iPhone’s watch app. You can call or message — or send doodles and vibrations if your friend has an Apple Watch. Double click this button to use Apple Pay at retail stores.

— Swipe down to get notifications. Swipe up to get Glances — highlights such as weather, calendar and stock quotes. Swipe left and right to go through the various Glances. The one on the far left is the settings, such as muting.

— Interact with icons and buttons by lightly tapping on the screen. A hard press, known as a Force Touch, will activate other functions. It changes from app to app, and the best way to learn is to try it and see what it does. Force Touch the watch face to choose other designs and options.

— For a screenshot, press both side buttons simultaneously— lightly, or it won’t work. Images appear in your phone’s Photos app.

One of the Glances is for the Activity app. Go through the prompts so the watch can nag you when you’ve been sitting too long.

The watch uses the GPS sensor on your phone to measure distance during workouts. Without the phone, it counts steps, which tend to be inaccurate. However, if you walk or run with your phone a few times, the watch will calibrate those steps for better accuracy offline.

You can listen to music or view photos stored on the device. Go to the phone app to choose playlists and albums to sync.

Go to “Passbook & Apple Pay” on the phone app to enable mobile payments at retail stores. You can then pay without the phone with you.

To add apps, visit the App Store within the phone’s Apple Watch app.

Visit an Apple store. No appointment is needed. Besides the video tutorials, Apple is also offering free video chats online. 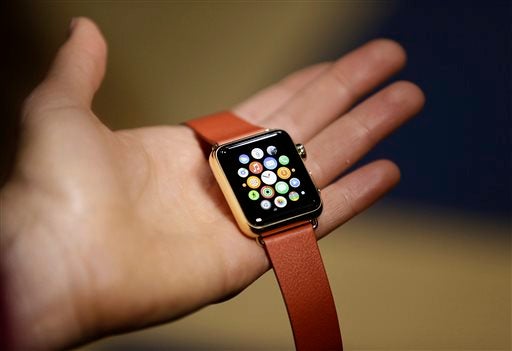 In this March 9, 2015 file photo, a woman holds the Apple Watch during a demo following an Apple event in San Francisco. AP