Pilot to fly solar plane across Pacific for 5 days, 5 nights 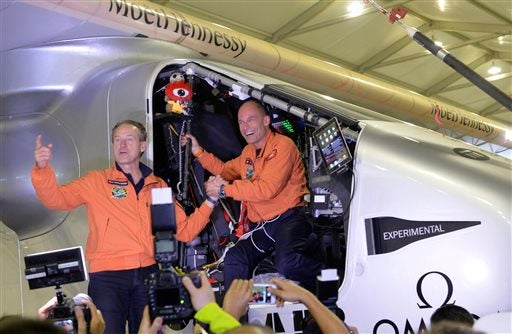 In this March 31, 2015 photo, Swiss pilots Andre Boschberg, left, and Bertrand Piccard stand in the cockpit of their solar powered plane after it touched down at Chongqing Jiangbei International Airport in southwestern China’s Chongqing Municipality. Borschberg said Sunday, May 3, 2015, that he is anxious but excited about flying the Solar Impulse 2 solo from China to Hawaii on the longest leg of the first attempt to fly around the world without using a drop of fuel. CHINATOPIX VIA AP

BEIJING—A pilot said Sunday he is anxious but excited about flying a solar plane solo from China to Hawaii on the longest leg of the first attempt to fly around the world without a drop of fuel.

André Borschberg, 62, is due to fly over the Pacific Ocean for five days and five nights in the plane that has more than 17,000 solar cells on its wings to power its motors and recharge its batteries for nighttime flying.

The Solar Impulse 2 set off from Abu Dhabi in March and has stopped in Oman, India and Myanmar. Borschberg and another Swiss pilot, Bertrand Piccard, are taking turns flying the single-seater Swiss plane during a five-month journey to promote renewable energy use.

The 8,175-kilometer (5,079-mile) flight from Nanjing in eastern China to Hawaii—which may take off Thursday, depending on weather—is the seventh of 12 flights. None of the previous legs were more than 20 hours—compared with an estimated flight time of 120 hours to Hawaii.

“It’s the most challenging, yes, in the sense that we never flew over the oceans,” Borschberg said in a phone interview from Nanjing.

“There are of course also question marks with the type of airplane we have, is it capable to fly solo with this type of energy, and of course the challenge is on the pilot side as well … can I stay alert for this leg and be able to pilot this airplane, can I keep my energy at the right level, can I keep my spirits, my mindset to get this airplane to Hawaii.”

The aircraft will climb to the altitude of Mount Everest, almost 9,000 meters (29,500 feet), during the day to get more sunlight, recharge the batteries and store more energy. At nighttime, the plane will fly lower, at a minimum of 1,000 meters (3,000 feet). The pilot will experience temperatures ranging from 35 degrees Celsius (95 degrees Fahrenheit) in the morning to minus 20 degrees Celsius (minus 4 degrees Fahrenheit) early in the evening while the plane is still high up.

“It’s winter and summer every day in the cockpit,” said Borschberg, who flew military jets for 25 years as a reserve pilot in the Swiss army and is an entrepreneur by profession.

He plans to take periods of rest of 20 minutes up to eight times a day, but said he doesn’t know if the weather or turbulence will let him. Borschberg said the plane has a “virtual co-pilot” that is a stabilization tool. It will sound an alarm to wake him if the aircraft does something unplanned.

The cockpit is too small to stand in, although the seat can recline into a horizontal position to allow him to lie down and practice yoga. He also plans to use breathing techniques and meditation to help him through the long journey.

He said that when flying, he focuses on how he feels as well as the situation in the air, so that the journey wasn’t just about exploring how to cross the Pacific using solar energy.

“You don’t have the pressure of time so with this airplane you can really live the present moment,” he said. “It’s almost an inner voyage, at the end it’s not so much exploring the Pacific … it’s also exploring myself.”

After Hawaii, the plane is slated to stop in Phoenix and New York before flying over the Atlantic Ocean. It will then stop either in southern Europe or North Africa, depending on weather conditions.–Louise Watt