The match may be over, but the rivalry between Floyd Mayweather Jr. and Manny Pacquiao continues, with many people from all walks of life continuing to weigh in on the megafight two days after the undefeated American defeated the Filipino boxing hero via unanimous decision.

READ: Holyfield: Pacquiao should have won vs Mayweather

It came as no surprise that many netizens reacted strongly when Olivia Culpo, a former Ms. Universe from the USA, on Sunday posted on her Instagram account a collage of a photo of Mayweather and Pacquiao and a picture of her winning over Filipina Janine Tugonon in the 2012 pageant.

The post was accompanied by the caption: “[It’s] fight night, people! #Throwback to me and Miss Philippines doing our best face off @tugononjanine.” 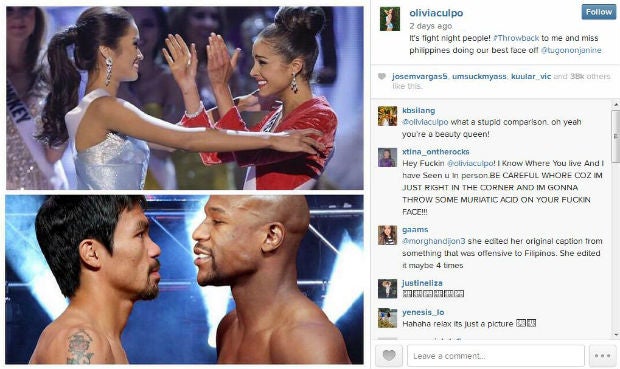 Several netizens, however, noted that the beauty queen just edited the caption after receiving criticisms. A screengrab of her initial caption read: “Philippines v USA lol to whoever made this. #throwback #ohsnap.” 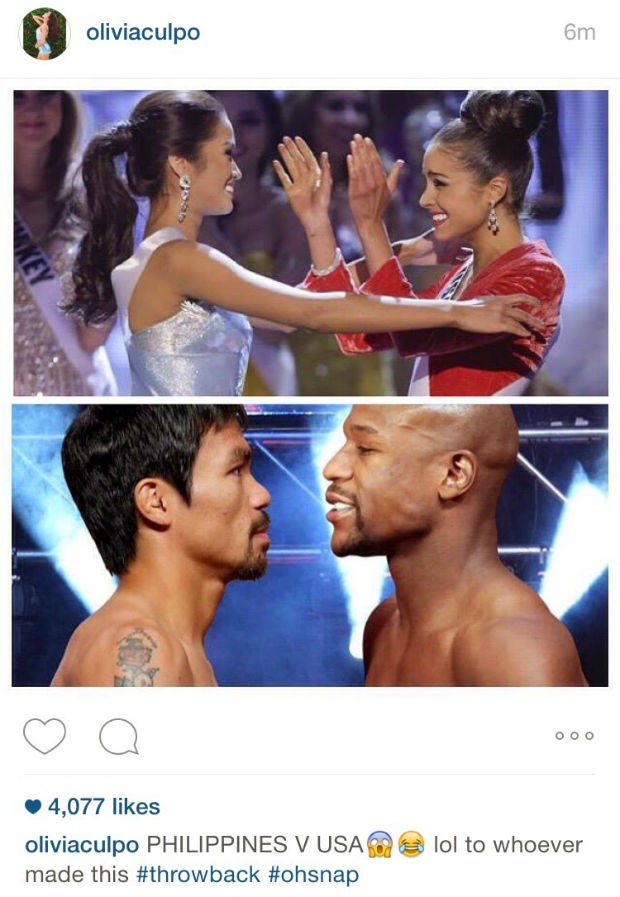 Instagram user @yunisfalcutila commented, “EDITED. You should be a good role model, not a rude model.”

@tokyorker said: “A beautiful face come from intelligent mind! And you (didn’t) have that when you were in Ms. Universe! Togonon is the real winner in our hearts!”

@akositik posted, “You’re a big joke, Ms. Culpo! I hope you remember how (you) were favored to win that night. Just like Floyd, (you) won but not respected. Sad, (right)?”

Instagram user @jharasawa, however, told other netizens to take things easy on Culpo. She said, “Chill, guys! I don’t think she intended to insult. Let’s just think it this way, they’re just being obnoxiously proud of their country. It’s the way it is. So let’s move forward. Peace!”

When asked what she thought about the post, Tugonon wrote on her Twitter account, “@gelogallardo I don’t see anything wrong about it either?? (It’s) a cool edit #thatsjustme #happyalways.”

With the match being deemed underwhelming by many, some netizens couldn’t help but throw in the punches themselves. IDL