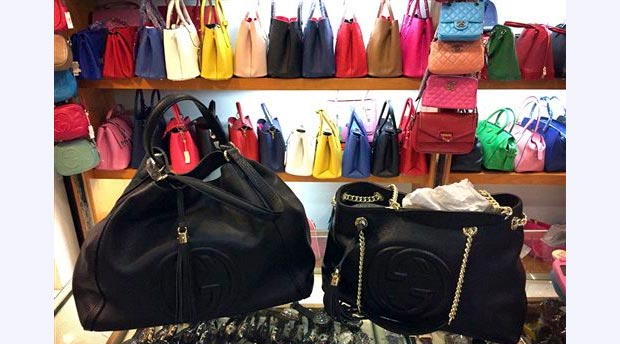 In this March 11, 2015 photo, counterfeit branded bags appear on display in a room hidden from the public area of a popular shopping mall in Beijing. A review of hundreds of pages of court documents from cases in the United States and China, along with interviews with lawyers, investigators, government officials and industry representatives, show that a lack of legal cooperation between the West and China is allowing counterfeiters to use Chinese banks as financial shelters. AP

SHANGHAI — Kim Sbarcea knew exactly what she wanted. She typed “Tiffany Elsa Peretti mesh earrings” into Google and chanced upon a pair of the $450 earrings for — deal of deals! — $32.

In that instant, Sbarcea’s money was sucked from her house in Christchurch, New Zealand, into the global counterfeiting market, where Chinese banks have emerged as key conduits in an illegal industry estimated to be worth $1.8 trillion this year.

At least three prominent Chinese banks serve as safe havens for counterfeiters, who use them to process credit card payments or move their money around the globe, The Associated Press has found. A review of hundreds of pages of court documents — along with interviews with lawyers, investigators, government officials and industry groups — shows that a lack of legal cooperation between the West and China is allowing counterfeiters to use Chinese banks as financial shelters.

Five lawsuits filed in the United States against counterfeiters reveal a pattern: Counterfeiters sold fakes online in the U.S., using credit cards or PayPal. Then, records show, they transferred millions to accounts at two of China’s largest, state-owned banks — the Bank of China and the Industrial and Commercial Bank of China — as well as China Merchants Bank.

The banks do not dispute that the accused counterfeiters held accounts, but refuse to comply with U.S. court orders to freeze funds or disclose information about accounts in China, saying that would violate bank secrecy laws. The banks said they are committed to fighting counterfeiting, have broken no laws, and are caught in a jurisdictional dispute between China and the United States.

In a 2013 letter, the Chinese Embassy in Washington complained to the U.S. State Department about subpoenas served “time and again” on Chinese banks. The embassy wrote that demands to freeze assets and disclose information about accounts in China amounted to “wrongful acts that disrespect China’s sovereignty and laws.” Chinese regulators later warned the issue could “undermine” Chinese-American relations.

In one of two lawsuits, Tiffany & Co. seeks $58.5 million in damages in a New York federal court from an online counterfeiting ring that spans three continents. Tiffany said it traced PayPal transfers to Bank of China, ICBC and China Merchants Bank accounts, and also found that the Bank of China was processing credit card payments for one defendant. A Latvian bank handed over details about the illicit money flows, but the Bank of China refused to cooperate, U.S. court documents show.

Gucci is seeking $12 million in damages in a New York federal court from a counterfeiting ring it said sold millions worth of fake handbags and wallets to U.S. consumers. Using records provided by JPMorganChase, Gucci traced $530,000 in transfers from counterfeiters in the United States to Bank of China accounts. But the Bank of China refused to freeze those funds for Gucci. Instead, it secretly froze over $890,000 of the accused counterfeiters’ money to cover its own legal costs, Chinese court documents show.

The other two lawsuits were filed by the U.S. Justice Department, which traced millions in online sales of counterfeit sports jerseys to Bank of China and ICBC.

“We have to find better ways of gathering evidence,” said Mark Cohen, a former intellectual property attache at the U.S. Embassy in Beijing.

More than 90 percent of the banks used by online counterfeiters to process credit card payments are Chinese, according to the International Anti-Counterfeiting Coalition, a non-profit industry group whose members include Apple Inc., Procter & Gamble and Tiffany & Co.

In the past, Chinese banks have sometimes disclosed information in response to U.S. lawsuits. The value of that information is clear: Lawyers, using transaction information from a Shanghai account obtained on the order of a New York court, cracked a network that shipped dangerous counterfeit blood glucose test kits for diabetics to 600 U.S. pharmacies.

Now, however, banks are tightening enforcement of secrecy rules, in part because China’s consumer protection law was broadened in 2010, said Zheng Junguo, an associate professor at China University of Political Science and Law.

The U.S. also restricts access to financial information, but allows judges to order disclosure for lawsuits anywhere in the world. The U.K., Hong Kong and Singapore have similar provisions that can be used to fight transnational crime.

The only legal ways to get information about Chinese bank accounts are to file a lawsuit in China or make a request through the Hague Convention. Critics dismiss both as too cumbersome.

The Bank of China said the U.S. lawsuits had put it in an “impossible position,” caught between “U.S. court orders that compel BOC to freeze, turn over or disclose information about bank accounts in China, and Chinese law, which requires the bank not to freeze or turn over accounts in China.”

Gucci and Tiffany declined to comment on the ongoing litigation.