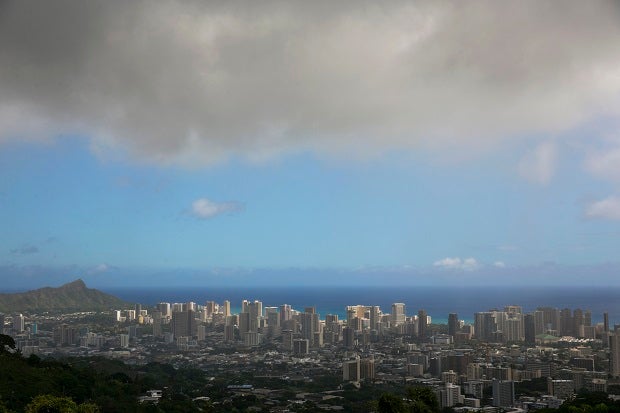 In this Aug. 7, 2014, file photo, clouds hang over Honolulu as Hurricane Iselle approaches. The National Oceanic and Atmospheric Administration’s Central Pacific Hurricane Center says the 2015 hurricane season in the region will see more storms than average from June 1 through Nov. 30. AP

Tom Evans, the acting director of the National Oceanic and Atmospheric Administration’s Central Pacific Hurricane Center, said at a news conference Tuesday that the prediction is based largely on current El Nino conditions in the region. El Nino is the warming of the water on the surface of the ocean along the equator, he said, and there are more storms on average during El Nino years.

“El Nino has been established, it’s out there,” Evans said. “We have the warm water and it’s been increasing over the last many months.” The El Nino conditions are expected to strengthen during the hurricane season, he added.

The prediction means Hawaii and the surrounding area will likely see between five and eight storms this season. There is a 70 percent chance of having an above normal season.

In 2014 there were five hurricanes in the region, which falls within the average of four to five storms per year. The last hurricane to directly hit Hawaii was Iniki in 1992. In 2014, Hurricane Iselle approached the island chain but weakened to a tropical storm just before making landfall. Two other major storms, Julio and Ana, barely missed the state.

Dennis Hwang, a coastal hazard mitigation specialist at the University of Hawaii’s Sea Grant program, shared some of the lessons learned from the busy 2014 hurricane season. “We dodged three major bullets last year,” he said of hurricanes Iselle, Julio and Ana.

“There were major damages, but it could have been a lot worse,” he said.

Hawaii Gov. David Ige was at the news conference and urged people to prepare in advance for the upcoming season.

“We know that no matter how much we prepare we can never be over prepared,” he said. “I really do embrace the notion that preparedness is the best thing that we can do at every level.”

The region’s hurricane season lasts from June 1 through Nov. 30. Most of Hawaii’s tropical cyclones happen in August, according to NOAA. The next tropical storm to form in the central Pacific basin will be named Ela.