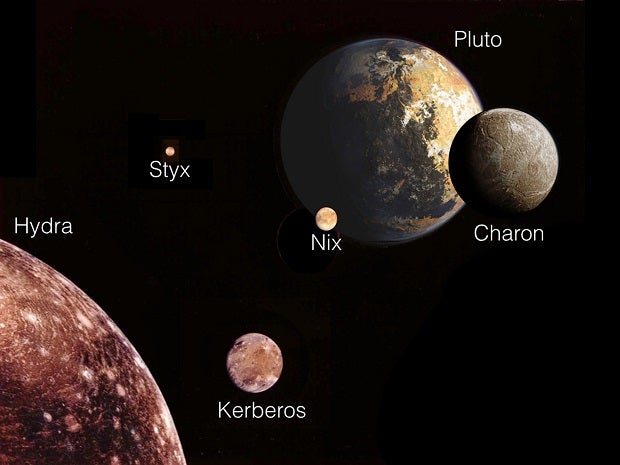 This illustration provided by NASA/JPL/Mark Showalter, SETI Institute depicts Pluto and its five moons from a perspective looking away from the sun. It is adapted from a classic Voyager I montage of Jupiterís Galilean moons, and is intended to highlight similarities between the Pluto and Jupiter systems when adjusted for size. Approaching the system, the outermost moon is Hydra, seen in the bottom left corner. The other moons are roughly scaled to the sizes they would appear from this perspective, although they are all enlarged relative to the planet.  AP

WASHINGTON, United States — There’s a chaotic dance going on at the far end of the solar system, involving Pluto and five of its closest friends, a new study finds.

Hubble Space Telescope images of Pluto, its largest moon Charon, and tinier moons Styx, Nix, Hydra and Kerberos show the odd rhythmic gyrations of the six distant objects in a dance unlike anything in the system.

What makes it so odd is that there’s a double set of dances going on. First, Pluto and Charon are locked together in their own waltz “as if they are a dumbbell” with a rod connecting them, said study author Mark Showalter of the SETI Institute in California. It’s the solar system’s only binary planet system, even though Charon isn’t technically a planet, he said. Pluto, too, is no longer considered a full planet.

But Pluto and Charon aren’t alone, and that’s where it gets more complicated.

The four little moons circle the Pluto-Charon combo, wobbling a bit when they go closer to either Pluto or Charon, being pushed and pulled by the two bigger objects.

Those four moons orbit Pluto-Charon in a precise rhythmic way, but with a twist: They also interact when they near each other. So it seems like they all dance to one overarching beat but not quite in the same way, just doing their own thing, said planetary scientist Heidi Hammel of the Association of Universities for Research in Astronomy.

“It’s kind of like you’d see at a Grateful Dead concert,” Hammel said. She wasn’t part of the study, but praised it as giving a glimpse of what might be happening in other distant star systems where there are two stars and planets that revolve around them, like the mythical Star Wars world of Tatooine.

With the tiny moons wobbling and flipping over in an unpredictable and chaotic way, if you lived on Nix or Hydra, the sun would come up in different parts of the sky, if at all on some days, Showalter said.

“It’s a very strange world,” he said. “You would literally not know if the sun is coming up tomorrow.”

NASA’s $700 million New Horizons spacecraft will arrive in the Pluto system in mid-July after a nine-year 3 billion mile (5 billion kilometer)flight that started before Pluto was demoted to dwarf-planet status.