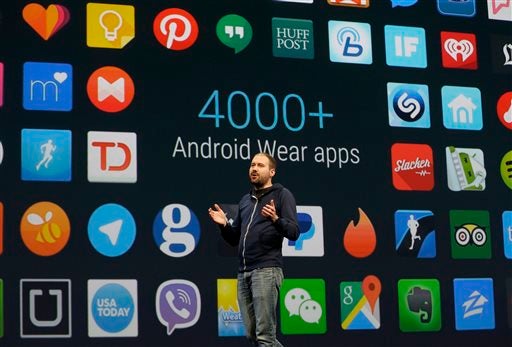 In this May 28, 2015, file photo, David Singleton, director at Android Wear, speaks during the Google I/O 2015 keynote presentation in San Francisco. With the upcoming M version of Android, you give permission as apps need it. AP

SAN FRANCISCO— New features promised for smartphones, tablets and watches could improve how we interact with technology. Although it’s too soon to tell how well these will work in practice, here’s a look at what I’m looking forward to most this fall.

I like to do other things, such as checking email or Facebook, when I’m watching video. Laptops let me do this. With iPads, video stops as soon as I open another app. I need to pick up a second device to multitask.

With the upcoming iOS 9 update, you can slide a window from the right of an iPad to launch a second app, such as a map when you’re doing email. Best of all, you can have video running in a small window in the foreground while you do other things with an app that takes up the rest of the screen. You can even move the video off screen and still listen to its audio while you work.

Samsung has tried this with some Android phones and tablets, with mixed success. Video sometimes stops anyway when you try to run it on the side, as apps weren’t designed with this in mind. With Apple, it will be a core feature.

Apple Maps has improved a lot for driving and walking directions since it ousted Google Maps in 2012 as the default service on iPhones. Transit directions are coming with iOS 9, though only in select cities at first. In the U.S., that will be Baltimore, Chicago, New York, Philadelphia, the San Francisco Bay Area and Washington. It’s not everywhere, but it’s a good start.

On Android, Google Maps will get offline navigation, matching what Windows phones offer with Here Maps. You’ll get turn-by-turn directions and details on local businesses even when cellular service is sketchy or nonexistent. You’ll have to download a specific region of the map ahead of time, and it’s not yet clear how easy or how wide of a region that will be. It’s also not yet known whether this feature will extend to Google Maps on iPhones.

Siri on Apple devices and Google Now on Android devices are supposed to get smarter by doing more based on context. Calling on Google’s assistant while listening to a song might give you information on the artist. Doing so while reading an email on movie plans might get you reviews and trailers. Siri, meanwhile, should know whether you’re going on a run or getting in a car. You might automatically get music on a run, but an audiobook in your car.

Siri also promises to anticipate your needs. If you have a meeting coming up, she’ll remind you to leave, factoring in current traffic. Google Now has been doing that for years, with mixed results. I get reminders to leave for the airport followed by directions back home, for instance. I look forward to seeing how well Siri and Google Now perform with the upcoming smarts.

Android users will get more control over what permissions they give apps. Currently, you’re shown a long list of permissions when installing new apps, such as letting the app access your location or the phone’s microphone. You have to accept all of them or forgo the app.

With the upcoming M version of Android, you give permission as apps need it. That’s how it works on iPhones. So if an app needs access to your camera, you decide then whether to grant permission. If you decline, you can still use the app’s other features.

On Apple Watch, apps from outside parties have essentially been extensions of phone apps. All the computing is done on the phone, with bits of information transferred to the watch’s screen wirelessly.

That will change with the upcoming watchOS 2 system. For the first time, third-party apps will be able to directly interact with sensors and controls on the watch, something Apple apps can already do. That makes it possible for outside parties to write games, fitness and other apps that work without the phone.

Apple Watch will also be able to play video for the first time — if you don’t mind the small screen.

Phones running Microsoft’s system have a lot of innovations, including direct links from the home screen to specific tasks within apps. Windows phones suffer from a lack of apps, though. New tools will make it easier for app developers to convert their existing iOS and Android apps to the upcoming Windows 10. Windows phones could become a viable alternative — if developers see a reason to bother. TVJ 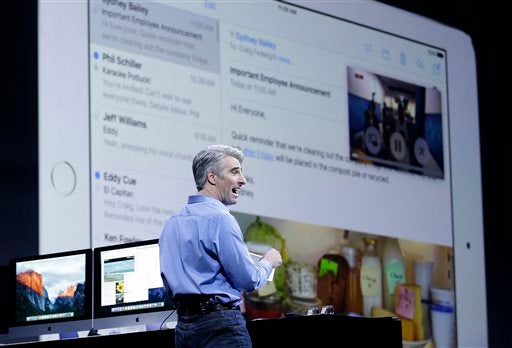 In this June 8, 2015, file photo, Craig Federighi, Apple senior vice president of Software Engineering, demonstrates the multitask feature on an iPad at the Apple Worldwide Developers Conference in San Francisco. With the upcoming iOS 9 update, you can slide a window from the right of an iPad to launch a second app, such as a map when you’re doing email. AP