Spacecraft that landed on comet finally wakes up 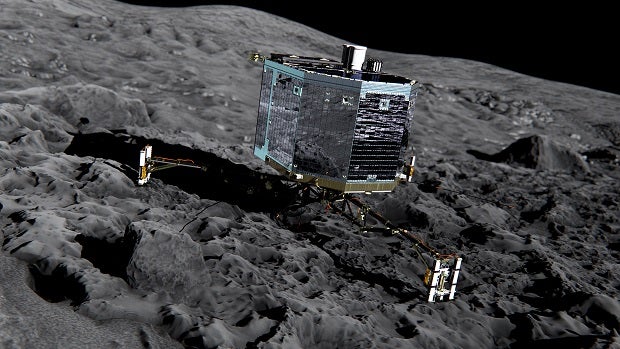 This artist impression from Dec. 2013 publicly provided by the European Space Agency, ESA, shows Rosettas lander Philae (front view) on the surface of comet 67P/Churyumov-Gerasimenko. The comet lander Philae has awakened from a seven-month hibernation and managed to communicate with Earth for more than a minute, the European Space Agency said Sunday June 14, 2015. The probe became the first spacecraft to land on a comet when it touched down on the icy surface of 67P/Churyumov-Gerasimenko in November. Shortly after its historic landing, Philae managed to conduct experiments and send data to Earth for about 60 hours before its batteries were depleted and it was forced into hibernation. AP

BERLIN, Germany — To scientists’ relief and delight, the Philae spacecraft that landed on a comet last fall has woken up and communicated with Earth after seven long months of silence, the European Space Agency announced Sunday.

Philae became the first spacecraft to settle on a comet when it touched down on icy 67P/Churyumov-Gerasimenko in November. But the solar-powered probe came down with a bounce and ended up in the shadow of a cliff instead of in direct sunlight.

As a result, Philae managed to conduct experiments and send data to Earth for only about 60 hours before its batteries ran out and it was forced to shut down its systems and go silent.

Scientists had hoped the probe would wake up again as the comet approached the sun, enabling Philae’s solar panels to soak up enough light to charge the craft’s main battery. But there were fears its mission would be cut short.

“I’m not really surprised it happened, but if you wait for several months and then suddenly in the middle of the night you get a call saying, ‘We have a signal from Philae,’ it’s exciting,” said Stephan Ulamec, project manager at the German Aerospace Center, or DLR. “We’re very happy.”

The brief burst of communication contained 300 packages of data that were relayed by the probe’s mother ship, Rosetta, which is orbiting the comet.

“We only received data for about 85 seconds. These data are housekeeping and system data from the lander,” Ulamec said. But it was enough to tell scientists that the probe is doing well and getting sufficient sunlight to keep communicating.

Ulamec said the probe appears to have been awake for several days before it called home.

Scientists will now work to change Rosetta’s orbit so that the link to the lander lasts longer and they can start sending commands for it to carry out new measurements. The next opportunity to communicate with Philae should come on Sunday night, Ulamec said.

Scientists also hope that Philae’s restart will allow them to pinpoint where on the 2.5-mile (4-kilometer)-wide comet the washing machine-size probe landed. Its exact location has been a mystery.

On Aug. 13, the comet will reach the point at which it is closest to the sun before swinging back out again. Ulamec said the lander should get enough sunlight to operate until October, when it will once again fall silent, possibly forever.