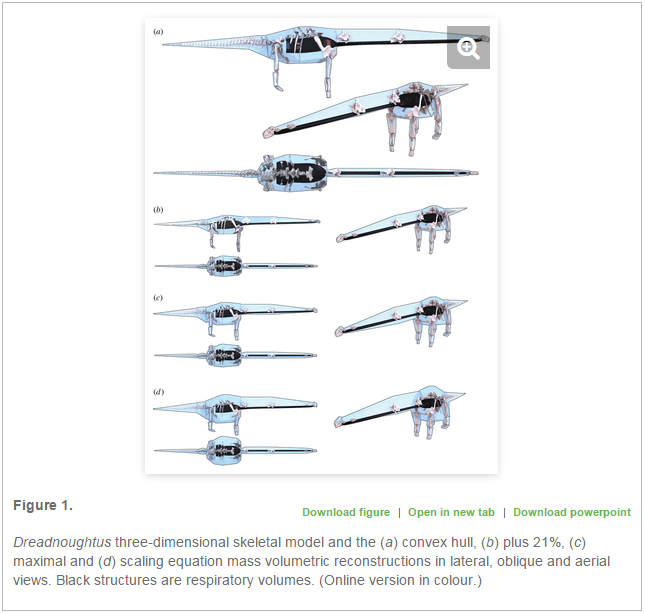 One of the contenders vying for the title of world’s largest dinosaur may not be as big as it was originally perceived to be, a new study published in Biology Letters said.

In a study titled “Downsizing a giant,” the 85-feet long titanosaurian sauropod dinosaur or Dreadnoughtus, which was first estimated to be weighing around 60 tons, was reported to weigh only around 30 to 40 tons.

Sauropod dinosaurs, which the study said “included the largest terrestrial animals to have ever evolved,” dates back to 66 to 84 million years ago in present-day Argentina during the Upper Cretaceous age.

The Dreadnoughtus, whose name means “fearer of nothing,” was first measured based on the circumference of its leg bones. A report by the National Geographic said a full-grown Dreadnoughtus can sit on a classic Boeing 737, a twin-jet airliner.

The new study used a three-dimensional volumetric model of the Dreadnoughtus skeleton as basis, including models of three birds, two crocodiles, a lizard, and two other big sauropods for basis.

Instead of scaling up from the size of the limbs, the researchers wrapped a body shape around the skeleton, adjusting the shape based on the information from other animal models. They derived a mass from estimated density based on information from modern-day dinosaur relatives.

The researchers did not reach the 60-ton mark.

“Our analysis also reveals that the higher range estimates predicted by bivariate scaling equations appear to be highly incompatible with volumetric models that are based directly on currently available volume and density data from living vertebrates,” the authors said.

“Indeed, in the case of Dreadnoughtus, the mean, and perhaps even some lower-end, scaling equation estimates appear to be implausible based on current data. The high scaling equation mass for Dreadnoughtus also appears to result in a discrepancy in relative mass predictions between the modelled sauropods,” they added.

However, the National Geographic said Drexel University paleontologist Ken Lacovara, who published the initial description of Dreadnoughtus, was not convinced with the new analysis.

“There’s no physical reason, no biomechanical reason I know of, that would require Dreadnoughtus to have anomalously large limb bones,” Lacovara said. “It’s more parsimonious to think that Dreadnoughtus had the limbs it needed to have.”