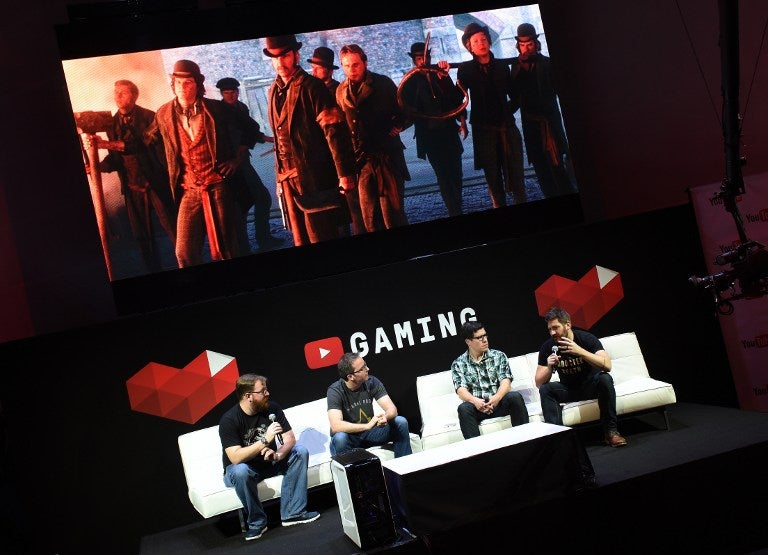 A panel discusses YouTube’s venture into game streaming called YouTube Gaming on the second day of the Electronic Entertainment Expo, known as E3, at the Convention Center in Los Angeles, California, on June 17. AFP

LOS ANGELES, United States—YouTube is wading confidently into turf dominated by Amazon-owned Twitch, with a service tailored for the hot trend of videogame play as a spectator sport.

“Having a destination where you can get all the gaming content you care about is really important,” YouTube head of gaming partnerships Ryan Wyatt told AFP as he demonstrated the soon-to-be-launched venue for live or on-demand video focused on gaming.

“That is why we created this.”

Billions of hours of video related to gaming are watched monthly at YouTube, from “walk-through” clips showing players how to handle challenges, to comedic commentary and in-game action, according to Wyatt.

The online arena for video game channels incorporates the search smarts of Google, which owns YouTube, to surface fresh or must-see content.

The potential audience for YouTube Gaming is huge given that hundreds of millions of people seek out videogame-related content at the service.

“We are doing billions of hours of watch time in gaming,” Wyatt said. “There should be a lot of traction going into this.”

YouTube Gaming will debut in Britain and the United States in the coming months, featuring on-demand video as well as live broadcasting of games being played.

Along with the YouTube Gaming website accessible through web browsers, there will be an application for mobile devices.

US online retail giant Amazon last year bolstered its Internet video presence, whistling past Google to snatch up Twitch and its huge audience for live-streamed gaming.

The acquisition was one of the largest in Amazon’s history: $970 million in cash for the three-year-old Internet company.

It allows viewers to chat with the players and others, lending it some of the qualities of social networking websites, and it sells advertising to generate income.

Google had reportedly been working out a billion-dollar deal last year to buy Twitch, but backed off due to antitrust concerns and cleared the way for Amazon to swoop in.

The take-over came with a boom in online viewing of real-time video game or computer game play as “e-sports” attract growing crowds as spectator events.

“We put a big bet on streaming of game play being a strong part of the console universe,” Sony Computer Entertainment chief Andrew House told AFP.

“I think we made the right bet, putting a share button on the controller was a big statement.”

“People want to immediately make it Google versus Amazon, YouTube versus Twitch, but it is really about empowering people to broadcast and share,” Wyatt said.

“We owe it to our viewers to have a live product; it is natural to say we are taking on their core business.”

Live broadcasting of videogame play has been at the heart of a booming “e-sports” trend. Wyatt saw similar attractions at work when it came to winning fans for e-sports and traditional sports.

“There is something clearly awesome about watching competition in general,” Wyatt said.

He predicted that e-sports would become a billion-dollar industry by the year 2018.