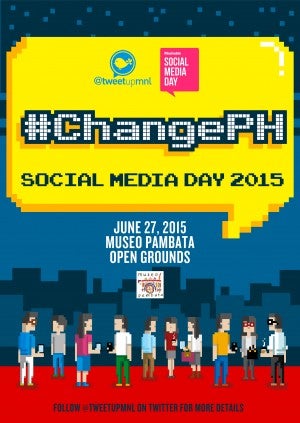 Thousands are set to gather on Saturday at the Museo Pambata open grounds along Roxas Blvd. in Manila for the Philippines’ fourth Social Media Day celebration.

This year’s theme is #ChangePH, a hat tip to the tech-driven innovations in the Filipino way of life and changes citizen wish to see from the upcoming elections.

Spearheaded globally by Mashable and locally by TweetUpMNL, Social Media Day is an annual event marking the triumphs, achievements and milestones in the use of social media and the internet.

“We are proud and humbled by the dozens of communities, organizations and partners who are collaborating to mount Social Media Day this 2015. We’re excited too for the expo and conference which everyone helped put together,” said TweetUpMNL co-founded Rosario Juan, who is both a social media strategist and entrepreneur.

According to Juan, the event also seeks to turn the social media spotlight on Museo Pambata, the country’s first interactive children’s museum.

“It is a noteworthy advocacy to promote children’s education, whether offline or online. We are thus happy to partner with Museo Pambata and thank them for welcoming Social Media Day at its open grounds,” said Juan.

Nina Lim Yuson, the museum’s president, will welcome participants at the conference.

“2016 is shaping to be the Philippines’ first digital-majority elections. For the first time in our history, we would be having elections with a majority of our population already connected to the internet,” said Cruz

Cruz said that “we hope to see innovations and changes in how politicians and political parties promote their platforms, identify and organize their supporters, and improve how politics is done. But more importantly, the widespread access to social media and the internet should empower and embolden people to use them to champion change during the campaign, at the precinct and after the polls.”

Free tickets to Social Media Day and event information are now available at tweetupmnl.com. As part of the celebration, Museo Pambata will lower its standard entrance fee from P150 to P100 during the event.ADVT