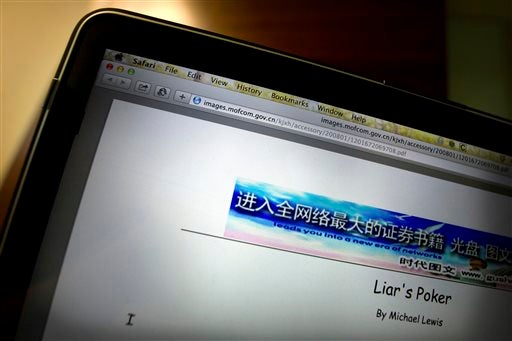 In this Thursday, June 25, 2015 photo, a pirated copy of the book “Liar’s Poker” by Michael Lewis, hosted on and loaded from a website run by the Chinese Commerce Ministry, is displayed on a computer screen in Beijing. AP

SHANGHAI — A complete bootlegged copy of Michael Lewis’ bestselling book about Wall Street, “Liar’s Poker,” was hosted on the official website of the Chinese Commerce Ministry, the agency responsible for intellectual property protection in China, The Associated Press has found.

How and why a PDF, in English, of Lewis’ raucous memoir about the excesses of Wall Street in the 1980s ended up on the ministry’s site remains a mystery. The ministry did not respond to multiple requests for comment this week, but on Friday morning removed the page from their website.

China has a long and troubled history with copyright infringement. Despite high-level attempts to bolster enforcement, particularly as Beijing turns to innovation as a source of economic growth, piracy remains rampant — and widely tolerated.

Andrew Hay, director of security research at OpenDNS, a network security firm based in San Francisco, confirmed the file was hosted on the Ministry of Commerce website and was not a spoof.

Internet registry records show that the website was created in 2003 by the ministry’s Foreign Trade and Economic Cooperation Department. The pirated copy of “Liar’s Poker” — which had been available at http://images.mofcom.gov.cn/kjxh/accessory/200801/1201672069708.pdf — was created in 2006, according to metadata embedded in the PDF file. The pirated e-book has been lurking on the ministry’s website since at least 2008, according to the San Francisco-based Internet Archive, which preserves copies of old websites.

It isn’t clear whether whoever uploaded the pirated book to the ministry’s servers meant for it to be seen across the Web, but it’s clear many have noticed — and downloaded it — since. One message board user included a link to the ministry’s website in a 2013 post entitled, “Best Business Books.”

The “Liar’s Poker” PDF on the ministry’s website carried a banner ad for a Chinese website called www.gushow.com , which offers free downloads of bootlegged books, including Chinese translations of books by George Soros.

Lei Geng, who runs www.gushow.com , said he was surprised his company was advertised on the ministry’s website.

“Before you called me I had no idea my website’s ad was on the Ministry of Commerce website,” he said. Lei said that he downloaded PDFs of the bootlegged books he distributes from Baidu, China’s most widely used search engine.

Asked whether he was aware that it is illegal to distribute copyrighted material for free, he said, “Don’t pretend that you find this unusual.”

The Commerce Ministry is not the only place to offer free copies of Lewis’ book in China. The AP was able to find three bootlegged copies of “Liar’s Poker” on Baidu Library, a document sharing platform, and one on Baidu’s cloud storage platform. Together, they had been read by over 500 people.

“Those should not be there,” said Baidu spokesman Kaiser Kuo. Once the copyright holder reports the infringement, Baidu will “remove them with alacrity,” he said. “If Michael Lewis’ publisher would contact us, it would be great.”

Since then, Baidu has stepped up copyright enforcement, instating 999-character limits on uploads to Baidu Library and working closely with publishers to flag infringing content.

Dorothy Cook, who is responsible for international sales at W.W. Norton & Co., which publishes “Liar’s Poker,” said Thursday night that she had alerted the department that handles copyright violations and take-down notices of the infringing content pointed out by the AP. “We’ve already reported this and are trying to get them taken down,” she said. “It’s a perennial problem.”