What does ‘B’ on alleged Binay rosaries stand for? | Inquirer Technology
Close
menu
search

What does ‘B’ on alleged Binay rosaries stand for? 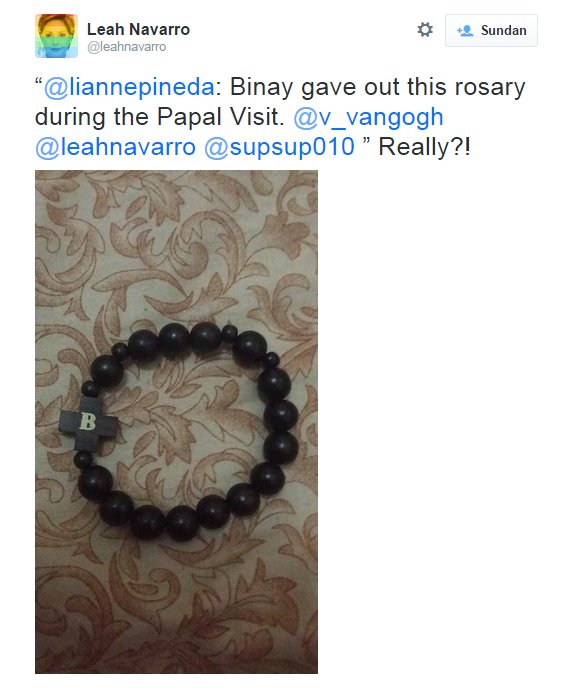 When Vice President Jejomar Binay went to Ormoc City in Leyte to extend “personal” help to the families of the victims of the capsized ferry, he told reporters that he also handed out rosaries in addition to financial aid.

After the news of Binay’s Leyte visit broke out, netizens took to social media to share photos of rosary bracelets with a letter “B” on the center of the crucifix, supposedly given by the Vice President.

Netizens particularly shared a March 11 Facebook post by a certain “Kath Lin,” which contained a photo of a woman with Binay, and a photo of the alleged Binay rosary.

In previous posts, some netizens said Binay also distributed the rosary bracelets during Pope Francis’ visit to the Philippines in January.

Facebook and Twitter users expressed disappointment over the viral photos, saying that putting a letter “B” on the cross was a form of disrespect to the Catholic faith.

While many were saying that “B” obviously stood for “Binay,” netizens used their imaginative minds on what the letter might mean.

Here’s what they have to say:

Netizens expressed their disappointment and wild guesses over the letter “B” printed on rosaries allegedly given by Vice President Jejomar Binay.