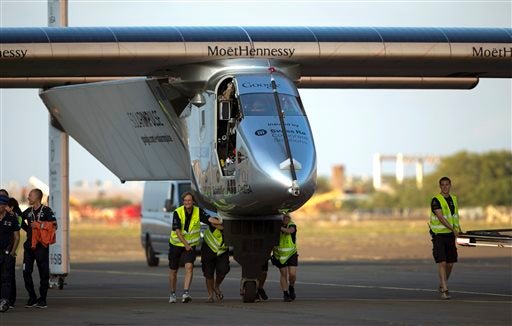 In this July 3, 2015, file photo, ground crew push the Solar Impulse 2, a solar powered airplane, towards the hangar after landingat the Kalaeloa Airport in Kapolei, Hawaii. AP

KAPOLEI, Hawaii— The pilots of a grounded solar-powered plane say they put too much stress on the batteries of their aircraft as they were leaving Japan for a five-day record-breaking flight to Hawaii.

The pilots then discovered they had too much insulation around the batteries for them to adequately cool down during the flight through tropical skies.

The team has grounded the plane in Hawaii while it replaces the batteries, which were damaged from overheating. The pilots plan to resume their round-the-world voyage in April.

Andre Borschberg, who was flying the single-seat airplane on the Japan-to-Hawaii leg of trip, said the airplane had to make a very steep climb and then steep descent after taking off from Nagoya to comply with Japanese restrictions.

“This of course put a lot of stress on the batteries. Because you extract a lot of energy very fast, you put it back through the solar generator,” Borschberg said.

The wings of Solar Impulse 2, which stretch wider than those of a Boeing 747, are equipped with 17,000 solar cells that power propellers and charge batteries. The plane runs on stored energy at night.

Fellow pilot Bertrand Piccard, who is alternating flying the plane with Borschberg, said the plane’s crew though the batteries would cool down but they didn’t.

“The batteries had too much insulation. We were afraid they would be too cold. And actually we made a mistake. We made them too warm,” Piccard said.

The pilots want to delay resuming their flight until spring because the days are shorter in the winter, not giving them enough time to soak up the sun’s power and charge batteries mid-flight.

The original plan had called for the plane to continue to Phoenix from Hawaii, followed by New York and then Europe. It was then to return to Abu Dhabi, the capital of the United Arab Emirates, where the journey began in March. The entire trip was expected to take about a year.

The flight — which is meant to demonstrate the potential of improved energy efficiency and clean power — will still go on, just nearly a year later.

Piccard said he would be spending the next several months raising funds to pay for the unexpected extra months of the project. The solar plane venture has spent about $150 million since it kicked off 13 years ago.

The plane will stay in a University of Hawaii educational hangar at Kalaeloa, a small airport outside Honolulu, until April. University spokesman Dan Meisenzahl said the school had hangar space available because it had been phasing out a program training pilots.

Borschberg landed at Kalaeloa on July 3 after a nearly 118-hour-flight that his team said broke the record for the world’s longest nonstop solo flight.

The aircraft visited Oman, India, Myanmar and China before making unplanned stop for nearly a month in Japan after high winds damaged a wing.

The trans-Pacific leg was the riskiest part of the plane’s global travels, as there was nowhere for it to land in an emergency.

The plane’s ideal flight speed is about 28 mph, though that can double during the day when the sun’s rays are strongest. The carbon-fiber aircraft weighs more than 5,000 pounds, or about as much as a minivan or midsize truck.