For dating apps in Asia, love by numbers or chaperone 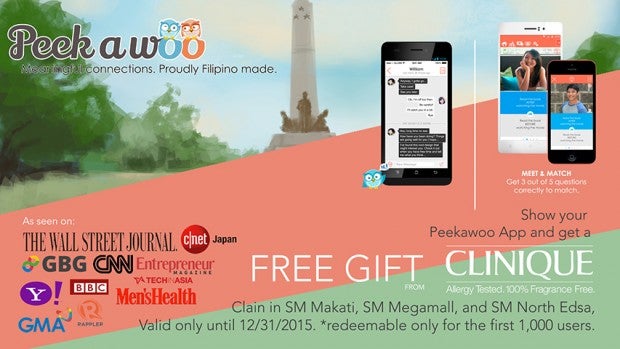 HONG KONG–Move over Tinder — a crop of dating apps in smartphone-addicted Asia is offering to recruit friends for group dates or send along a chaperone to steer the course of romance.

While dating apps developed in the West encourage one-on-one, often no-strings-attached meetings, many in Asia are as much about old-school courtship or friendship in a region where meeting a stranger in a bar can still be a taboo.

“My upbringing was very close to my parents, religious, traditional and old-fashioned. You couldn’t go on dates if your parents didn’t know the guy,” said Valenice Balace, who developed the Peekawoo service in the Philippines two years ago.

“I grew up with chaperoned dates and even when I was in college my kid sister was always with me on dates.”

Too shy to make eye contact in bars as a singleton, the 26-year-old turned to apps similar to Tinder, which boasts tens of millions of active users, where photos of potential matches are instantly liked or rejected.

But after one man suggested he come to her house after their first online conversation, Balace realized the set-up was not for her.

And so the Filipina entrepreneur created an app which not only discouraged users from meeting one-on-one but also offered a chaperone service for those who requested it.

As Peekawoo expanded -– it now has around 7,000 members -– it was no longer practical for the small company to provide a chaperone for every couple who asked for one, and so Balace’s team started organizing meetups instead.

It is a model shared by Hong Kong-based app Grouvly, which sets up groups of six people for dates.

“When I came to Asia, I realized it was hard to meet people,” explains Colombian-born CEO Camilo Paredes.

“I also realized that most of the Asians were somewhat shy, they’re not confrontational, they don’t put themselves out there.”

His solution was to mimic American Grouper, which matches two people according to the information on their Facebook profiles, then asks them to bring two friends with them to a bar for a six-person meet up.

While the majority of pairings are men meeting women, there is also the option of all-male or all-female dates.

“One-on-one can be super awkward. Two-on-two is still slightly awkward, but three-on-three is the magic number,” says Paredes.

Alongside expats, Hong Kongers now make up 50 percent of Grouvly’s users. In Singapore, most users are locals and there are plans to roll out the service to Japan, South Korea, Australia and China.

“For me, if somebody else likes the guy, they can have them,” says Aly, a 24-year-old blogger from the UK and Grouvly regular.

Aly finds these apps can be as much about making friends as looking for love, with Peekawoo’s founder saying this change of focus also allows women to take back control.

“There was one Peekawoo event where a Filipino-American guy offended a Filipina girl by asking her to go home with him,” Balace remembered.

“I told her, ‘I’m proud of you’. We told the guy what he did was wrong, and we never invited him again.”

Even if the Singapore-based Paktor — which claims 3.5 million registered users — is less averse to hook ups, it has recently also added functions such as group chats.

“People either organize a group meeting or they reach out to one person in that chat to have a conversation with them,” explains Joseph Phua, 31, co-founder of the app.

“It’s true that people here tend to be more reserved, less direct,” he added. “Asian society feels failure or rejection more strongly, it’s just part of the fabric of society. That carries on into the dating space as well.”

While apps are being created or tweaked to adapt to tamer local sensibilities, others like China’s WeChat can lead to casual trysts with a location-based “Shake” function.

But meeting a partner online in a global hub like Hong Kong still remains less common than in the West — despite 62.80 percent of people owning a smartphone, according to Google figures.

A 2011 survey led by Emil Ng Man-Lun of Hong Kong University’s Family Institute found that just five percent of locals had met a partner online or via an app, compared to 22 percent of Americans, according to Stanford University research published that year.

“Our impression is that this is rising. But by how much it is rising, we are not sure yet,” Ng says.

“People think they are a sign of promiscuity. They worry that they get into intimacy too early, without sufficient time for knowing each other. It seems, however, that these theories have not stopped people from using them.”