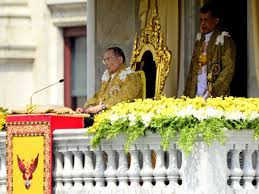 A man in Bangkok was sentenced to prison for 30 years for six Facebook postings, and a mother of two young girls in the northern province of Chiang Mai was sentenced to 28 years for seven postings, said iLaw, a watchdog group that monitors such cases. Their original sentences were halved because they admitted their guilt to the court.

Bangkok Military Court chief judge Maj. Gen. Panomthep Wesaratchanun said the trial of Pongsak Sriboonpeng was conducted behind closed doors because “What he wrote was beyond rude. Even the prosecutor did not want to read them out loud.”

Thailand’s lese majeste law is considered the harshest in the world, with those accused of defaming, insulting or threatening the monarchy facing prison terms ranging from three to 15 years on each count. Critics says it is often used as a tool to smother  social  and political dissent, and note that King Bhumibol Adulyadej himself proclaimed in a public speech that he is not above criticism.

Thais hold great affection for King Bhumibol, who is revered as a moral authority who stepped in repeatedly over the years to unify the country despite his lack of a formal political role.

The 87-year-old king’s fading from public life due to ill health, and the palace’s perceived role in bitter political battles that started in 2006, have tarnished the institution in recent years, undermining what had previously been near-universal respect for the royal institution.

The military junta that took power after last year’s coup declared protection of the monarchy a priority.

An increase in lese majeste cases under recent civilian governments accelerated with last year’s coup, and the cases have been handled by military courts instead of civilian ones. Many recent cases have involved content posted on  social  media.

In a case that did not involve the Internet, a military court Thursday in Chiang Rai province sentenced a man to five years — halved from 10 — after he pleaded guilty to tearing up a portrait of King Bhumibol. His lawyer had asked for leniency on the grounds that his client suffered from mental illness.