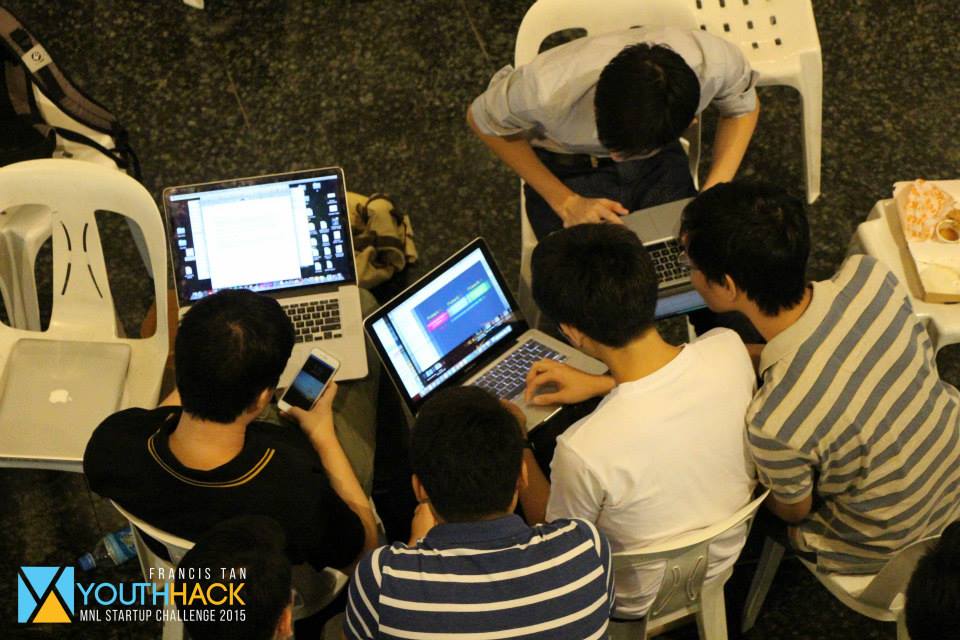 Participants prepare for their pitch at the 2015 YouthHack Mania Startup Challenge.

“Your network becomes your net worth,” Paul Rivera tells the crowd of 200-odd aspiring student entrepreneurs at the 2015 YouthHack Manila Startup Challenge. Rivera, Founder and CEO of Kalibrr, challenges participants from different high schools and universities across the metro to “go where [they’re] not supposed to be.”

“I want you to realize that a small group of people that can understand technology really well can disrupt and take down every established industry in the Philippines,” he adds. The business world  is constantly shifting, he explains, and “if you don’t reinvent your business, someone else will.”

Rivera was joined by other prominent members of the local startup community during the weekend startup event held last July 25 and 26 at Xavier School Greenhills, in San Juan City. Veterans in the industry took charge of the plenary sessions and workshops on marketing, ideation, and product development. Then students got to pitch their ideas to a panel of judges on the second day.

Started only one year ago, YouthHack, a for-purpose student-run organization with the goal of helping students learn more about startups, technology and entrepreneurship, has already generated much clout and is on its way to disrupt how the youth think of entrepreneurship and technology.

The two-day event culminated with the pitching competition, in which students proposed solutions to the world’s problems to a panel of venture capitalists, gamechangers, and seasoned businessmen.

Donald Lim, chief digital officer of ABS-CBN, emphasizes in his keynote address that successful startups do not limit themselves to “focusing on what customers need today,” but instead “look for their next needs.”

“Ideas are cheap,” Joan Magno, project manager at Kalibrr, explains during her workshop on product prototyping, “Execution is gold.”

The next big idea

“If you can think of a normal solution for it, someone has probably already thought of it,” Tenorio says, urging the students to “think crazier.”

Lim reiterates his sentiment, telling the students not to think “in a traditional way.”

Yancha states that “[d]evelopment is not development if it is not sustainable” during her ideation workshop, as “ideas do not happen overnight.”

While the workshops provided participants the chance to learn from mentors in the startup community, YouthHack’s first Startup Fair enabled them to become directly involved with the Philippine startup scene.

The Startup Fair aimed to connect local startups with YouthHack participants and like-minded students. It was also a preview of the country’s growing startup culture and community.

Startups that were represented include Anino PlayLab, ZAP, Shapecloud, Qwikwire, IntroMe, Kalibrr, Bambike, Task, Nooovle, and the Bitcoin Organization of the Philippines.

The future of Philippine tech

The winners of the 2015 YouthHack Manila Startup Challenge echoed what Pinky Natividad of Katalyst.ph told the participants on the day of pitching: “There’s no better time in the startup world than now.”

“Spore,” an environmental tracker that can measure air pollution and brainchild of Grade 10 students from Philippine Science High School, took the gold.

The champion for the university division was ConnectWorks, a mesh networking platform by Team Zantsuken.

YouthHack Founder and CEO David Ongchoco believes that the future of the local startup scene is bright, especially with the “variety of ideas” the YouthHack participants have come up with.

Ongchoco says just by “watching the pitches and hearing the ideas of the students at YouthHack,” the country could be seeing an influx of “some really cool startups [that] solve problems our country faces” in the next few years.

Rivera, also a speaker at last year’s Startup Challenge, says that “YouthHack represents what the Philippines can do.”

You can learn more about YouthHack by visiting its website www.youthhack.net and liking its Facebook Page: https://www.facebook.com/YouthHackMNL. If you’re interested in starting a YouthHack Chapter or becoming a local YouthHack events planner, you can email [email protected]