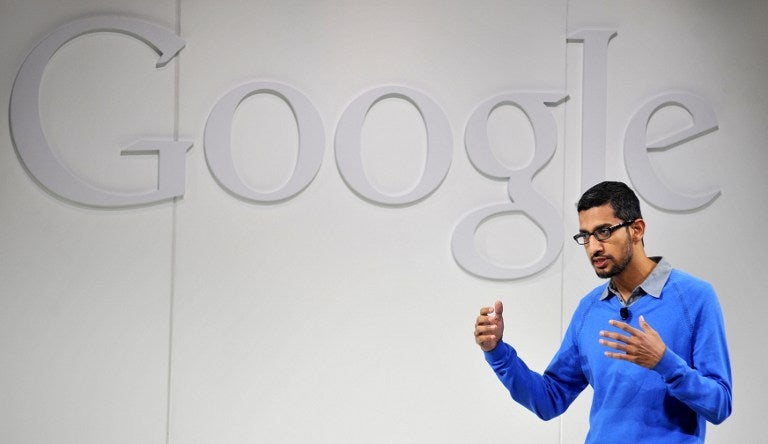 MUMBAI–India’s high flyers have proudly welcomed the appointment as Google’s new chief executive of Sundar Pichai, the latest home-grown engineer to rise to the top of the US corporate world.

Pichai, named head of the Internet titan on Monday, was born to humble beginnings in the southern city of Chennai and studied engineering at the Indian Institute of Technology (IIT) in Kharagpur before heading to America to further his studies and career.

Pichai, who started at Google in 2004, joins an illustrious club of Indian-origin business leaders who have made it to prestigious chief executive positions overseas, including Indra Nooyi at PepsiCo and Ajay Banga at MasterCard.

The 43-year-old also follows a well trodden path of Indians — including Microsoft boss Satya Nadella and Nokia head Rajeev Suri — who have trained at the prestigious engineering institutes, where competition for limited places is fierce.

“I am sure all IITs are celebrating today. Proud of you @sundarpichai,” tweeted Padmasree Warrior, Cisco’s outgoing chief technology officer who studied chemical engineering at the IIT in New Delhi.

– ‘Best and brightest’ -Hundreds of thousands of aspiring engineering students sit a gruelling exam every year to battle for a place at the publicly funded IITs dotted around the country.

“Engineering as a discipline has been one of the most sought after in India, so it’s very logical that the best and the brightest aspired to get into that,” human resources expert Padmaja Alaganandan told AFP.

“The students have already demonstrated determination and resilience to get in, so from there if launched on a global canvas it represents a very, very strong pool of talent,” added the executive director at PricewaterhouseCoopers in Bangalore.

Pichai’s family lived in a two-room apartment where he slept on the living room floor, according to local media. He was attracted to technology partly because of his father’s job as an electrical engineer at a factory.

Pichai left India for America after reportedly winning a scholarship to Stanford University and later studying at the Wharton School at the University of Pennsylvania.

Alaganandan said the tough and competitive atmosphere at IITs coupled with a masters from elite American schools was a winning formula.

“They have come up through a very competitive stream and have taken on adversity in that sense. With exposure to different cultures it’s an extremely successful combination,” she said.

Vikram Dhawan, director of Equentis Capital in Mumbai, said many Indians who have succeeded at the very top overseas have been able to quickly adapt to America’s workplace cultures.

“A common thread is the adaptability of Indian professionals to the local system and environment. That is the key. I think there has absolutely been some Americanisation of these individuals,” he told AFP.

Dhawan said multinational corporations were increasingly looking to developing countries for the “next big name”.

Indians often had an advantage over many of their Asian peers thanks to their proficiency in the English language, he said.

India, with a population of 1.25 billion, produces about a million engineering graduates a year and has earned a reputation for its booming IT outsourcing business, thanks to its large English-educated workforce.

Dhawan said ambitious Indians often left for the US and flourished in its aggressive corporate culture, rather than staying in India where companies have a tendency to keep positions in the family.

“I think one of the motivations of these very successful individuals for going overseas is because of the extremely meritocratic-based culture, against the Indian corporate system which is still pretty much family-driven,” he told AFP.

“After having emerged from a system which can straitjacket you, you end up in a place where you’re judged by your capability and inherent qualities, and that’s why they tend to thrive overseas.”