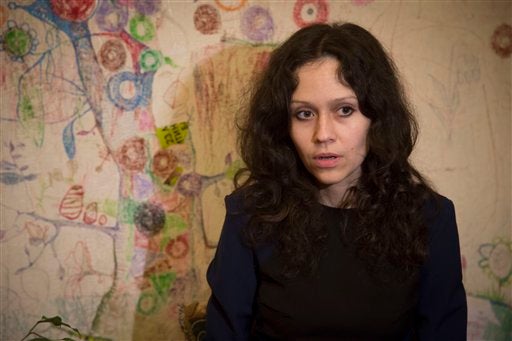 In this Wednesday, April 15, 2015 file photo, Lyudmila Savchuk speaks in an interview in her apartment in St. Petersburg, Russia. A Russian court on Monday, Aug. 17, 2015 awarded symbolic damages of one ruble ($0.01) to a former “Kremlin troll” Savchuk, who sued her ex-employer and demanded closure of what she describes as a “factory” that has been churning out Internet propaganda defending President Vladimir Putin. AP

PETERSBURG, Russia — A Russian court on Monday awarded symbolic damages of one ruble ($0.01) to a former “Kremlin troll” who sued her ex-employer and demanded closure of what she describes as a “factory” that has been churning out Internet propaganda defending President Vladimir Putin.

In an interview in April, Lyudmila Savchuk told The Associated Press how she and hundreds of colleagues in St. Petersburg managed several social media accounts, flooding the Internet with pro-Putin commentary and doctored images that landed on Russian and Western news websites.

Savchuk’s descriptions of the work coincide with those of other former trolls who have spoken publicly, although she was one of the few willing to disclose her identity. She quit after two months, deciding she couldn’t stand being part of a propaganda machine. She said most of the workers were young and attracted by relatively high monthly salaries of 40,000 to 50,000 rubles ($600 to $770).

The Petrogradsky district court on Tuesday set the damages at just one ruble as the plaintiff requested, but didn’t close the facility. Savchuk said she was happy with the ruling because she thought her mission had been accomplished.

“We have managed to prove that the trolls exist, which was the main goal,” she said outside the courtroom.

In her lawsuit, Savchuk sought moral damages, compensation of unpaid wages and demanded the closure of the company, Internet Research, saying its employees didn’t have proper Russian employment contracts.

Internet Research wasn’t immediately available for comment on the ruling.