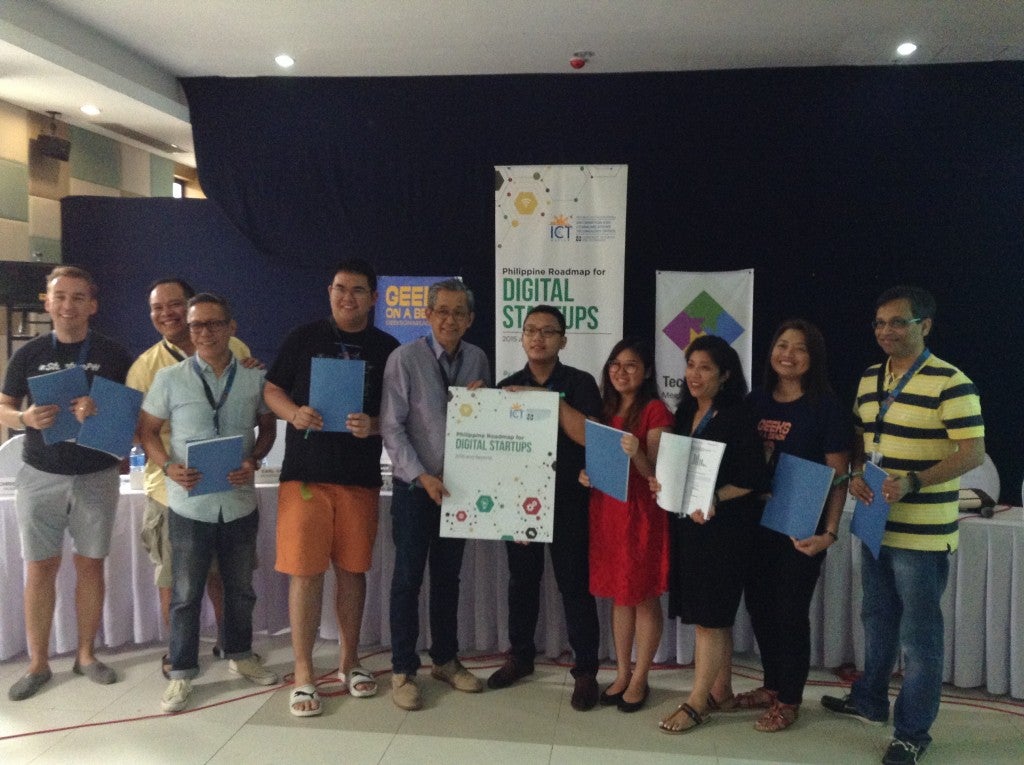 DOST-ICTO deputy executive director Mon Ibrahim and Karl Satintigan from the office of Sen. Bam Aquino (center) in a ceremonial turnover of the Philippine roadmap for digital startups. Yuji Gonzales/INQUIRER.net

BORACAY, Philippines—In a bid to turn the country to a global startup hub, the Department of Science and Technology (DOST) launched the Philippine roadmap for digital startups during the 3rd Geeks On A Beach conference here on Thursday.

READ: Formula to successful startup according to industry leaders

Emphasizing that the nationwide interest in the startup sector has been increasing in recent years, Ibrahim said the roadmap would “develop a coherent and consistent strategic plan for the country’s innovative ecosystem.”

“This is a work in progress. A lot of exciting things happened in the past years, and we are expecting a lot of more exciting things to happen from this initiative,” Ibrahim told reporters and bloggers.

Ibrahim said the government will be working side by side with the startup community, noting that the roadmap was a collaborative initiative.

Aside from giving direction to the country’s digital innovation, Ibrahim said the roadmap also aims to spur the growth of the Philippine economy.

“Ultimately, our goal is to generate startups that drive economic growth and provide solutions to our society’s most pervasive issues,” he added.

DOST-ICTO roadmap consultant Beryl Li said the emerging Philippine startup industry should strive to be a unique ecosystem by not merely imitating other models in order to maximize its budding potentials.

Li said the local startup sector should utilize the strengths of the Philippine ecosystem, which include a technology savvy youth demographics and a positive business climate.

However, she also cited weaknesses that may hinder startups from progressing, such as incoherent policies and weak and inconsistent Internet infrastructure.

DOST said the Philippine roadmap targets to achieve at least 500 local startups with a cumulative valuation of $2 billion, which would result in about 8,500 high-skilled jobs. At present, no Philippine startup has surpassed $50 million in valuation.

IdeaSpace founder and GOAB co-organizer Earl Valencia underscored the role of support from other sectors, both private and public, for the roadmap to attain its goals.

“Every huge startup ecosystem in the world has huge corporate support,” Valencia said.

“This (startup) can be the next business process outsourcing industry—meaning inclusive, distributed across the country, and helps people to uplift themselves,” he added.

Echoing Valencia, Arup Maity of Blast Asia said no individual can put up and sustain a multi-billion company on his own, no matter how good his ideas are.

“This roadmap is a great tool to get the rest of the government involved,” added Jay Fajardo of Launch Garage.

Meanwhile, Karl Satintigan, a representative of Sen. Bam Aquino, said the roadmap for digital startups may be the first step in crafting a Philippine startup bill.

“This is to encourage existing mechanisms in the government to support the startup industry,” Satintigan said, adding that the roadmap would also pave the way for government institutions to innovate its mindset and institutionalize sectoral efforts.

Commissioned by the DOST-ICTO, the roadmap was a product of discussions of local technology industry leaders, including the Philippine Software Industry Association, Philippine Development Foundation, Kickstart, IdeaSpace, and Techtalks.ph

Now on its third year, GOAB gathers delegates and speakers in the startup industry in a series of discussions, activities, and networking.
GOAB returns to the world-famous island of Boracay, its inaugural venue in 2013, after it was held in Cebu last year. Yuji Vincent Gonzales