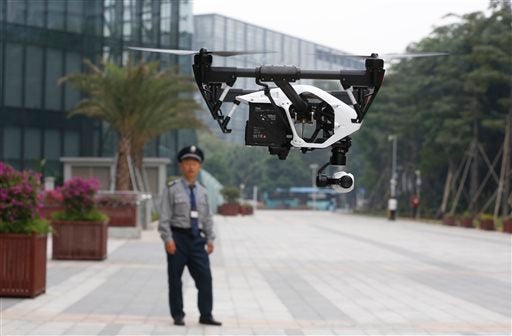 WASHINGTON, United States — Two men are in custody in the US state of Maryland on suspicion of trying to smuggle drugs and pornography into a prison with a drone, corrections officials said Monday.

Synthetic marijuana and bootleg pornographic DVDs were among the items that the duo intended to fly into the state prison in Cumberland.

“You couldn’t make this stuff up,” Maryland’s Secretary of Public Safety Stephen Moyer was quoted as telling local reporters.

The Maryland Department of Public Safety said in a statement that the two suspects were arrested on a road that runs by the Western Correctional Institution.

In their vehicle, officers found a quadracopter and its remote control flying console, as well as a handgun, the statement alleged.

Both men were being held in Cumberland — one on $250,000 bail and the other without bail — on suspicion of plotting to use a drone to airlift contraband into a correctional facility.

An inmate suspected of participating in the foiled effort is also facing charges after a search of his prison cell turned up contraband, the statement said.

It was thought to be the first time in Maryland that smugglers have been caught using a drone to overfly a prison wall.

Earlier this month, a bid to airlift tobacco, marijuana and heroin into an Ohio prison using a drone triggered a melee among some 75 inmates.

In July 2014, another drone bearing marijuana, tobacco and cell phones crashed outside a wire fence that surrounds a maximum security facility in South Carolina.

ADVERTISEMENT
TOPICS: Drone, Drugs, porn, Smuggling
Read Next
Japan delivers whiskey to space station for science
EDITORS' PICK
Wilder says costume wore him down before Fury did
Mallorca City: Home of Cavite’s finest industrial hub
Here’s How Protein and Calcium Deficiency Can Affect Your Kid’s Health
Desperate to stop spread of COVID-19, countries limit travel
Groups repeat call for justice, press freedom 34 years after People Power revolt
‘Are you still alive?’ Virus fears grip South Korean city
MOST READ
Dominguez: ABS-CBN account on unaired ads ‘does not tally’ with Duterte campaign experience
Macalintal: No such thing as ‘secret marriage’ amid Sarah-Matteo nuptials leak
ABS-CBN can’t operate beyond May 4 without a franchise – ex-CJ Puno
No need for Ginebra to reach out to Slaughter, says Chua
Don't miss out on the latest news and information.