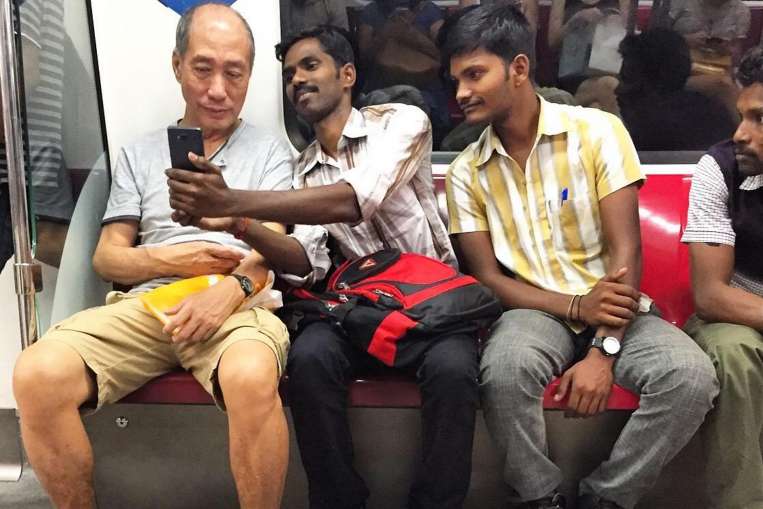 Saravanan asks if he can take a selfie with Rick Lau. Photo by Melody Zaccheus of The Straits Times/Asia News Network

We often see foreign laborers giving up their seats on public transport to Singaporeans.

Some of us might mumble a “thank you” and gratefully slip into the seat while others might reject their offer and look away.

On Monday however, Rimy Lau, 68, did a little more in an act that has been roundly praised online.

He encouraged three construction workers in an off-peak train in the evening to keep their seats after witnessing them scoot aside to make way for some Singaporean commuters.

Directing his comments to one of the trio who spoke the most English, he said: “Hey you can sit down… You don’t always have to give up your seat, especially not to men on the train. You come here to build our homes so you can sit also you know?

His action, captured in a Facebook post by this reporter who was in the same train carriage as them, has gone viral.

The post has been shared more than 8,700 times. Organizations such as the Singapore Kindness Movement have also shared it – the movement’s page chalked up more than 10,000 likes in the span of three hours on Monday night.

People who commented on the posts praised Lau for his inspiring act and recounted similar experiences of foreign workers rushing to offer their seats to Singaporeans – many a time with little acknowledgement.

The worker, Saravanan Samidurai, 28, initially appeared puzzled by Lau’s interaction with him.

But when he understood, he broke into a wide smile, whipping out his mobile phone for a selfie with Lau.

Lau, who has worked as a housekeeping supervisor at the Regent Singapore hotel for 20 years, said he learned that the workers were new to Singapore.

Here for their third day, they had told him that they were on the way to a construction project in Admiralty.

Speaking to The Straits Times, Lau said; “They were so kind-hearted… They wanted others to sit down. I told them that it was not necessary as there was still space in the train, and they are new here with a long ride ahead before they would reach their destination.”

This reporter also witnessed Lau dishing out advice on how to navigate Singapore’s transport network.

He homed in on the Little India MRT station and shared with them some bus routes.

He also said that Saravanan could contact him “anytime” if he needed help.

Another user Patricia Wong wrote: “A great reminder to be kind and polite to the many foreign construction and cleaning workers who are helping us build and clean our homes and roads – we can all start by acknowledging them with a smile or greeting or thank you.”

Lau, a bachelor, said the workers shook his hands and waved goodbye to him after he got off at Ang Mo Kio where he lives.

“They were lost at Raffles Place and I saw someone ignoring them as they asked for directions to get around. As Singaporeans we should be courteous and help out when we can.

“They come here to work. This is how we can take care of them,” he said. KS