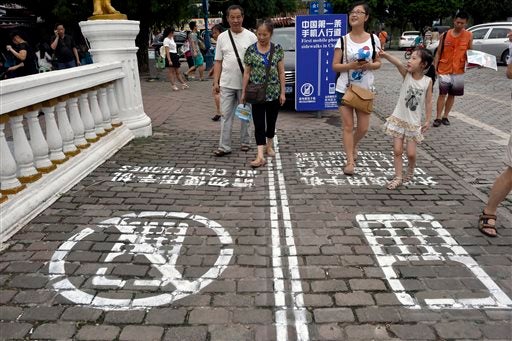 In this photo taken Saturday, Sept. 13, 2014, residents walk on a lane painted with instructions to separate those using their phones as they walk from others in southwest China’s Chongqing Municipality. AP

WASHINGTON, United States—It’s okay to use your smartphone walking down the street or on public transportation. But not at a family dinner. And definitely not in church.

Users of mobile devices are struggling to find the rules of the road for how and when to use the devices around others, but a survey out Wednesday shows a surprising consensus.

The Pew Research Center found 77 percent of Americans polled felt it was acceptable to use a smartphone while strolling down the street. Three-fourths also said it was okay on public transit or while waiting in line at the store.

But 88 percent said a family dinner was not an appropriate place for phone use and most said the same about a meeting (94 percent), the movie theater (95 percent) and a place of worship (96 percent).

But survey respondents did not always practice what they preached.

Eighty-nine percent said they used their phone during a social gathering—61 percent to read a text message or email, 58 percent to take a photo or video, 52 percent to receive a call, and 25 percent to surf the web, for example.

Etiquette has become a challenge as more people keep their smartphones on and with them at all times, Pew noted.

Pew found 92 percent of US adults now have a cellphone of some kind, with two-thirds owning a smartphone. Some 90 percent of them say that their phone is always with them. Thirty-one percent said they never turn their phone off and 45 percent say they rarely turn it off.

“This ‘always-on’ reality has disrupted longstanding social norms about when it is appropriate for people to shift their attention away from their physical conversations and interactions with others, and towards digital encounters with people and information that are enabled by their mobile phone,” said Lee Rainie, Pew’s director of Internet research.

“These are issues with important social consequences. Norms of etiquette are not just small-scale social niceties. They affect fundamental human interactions and the character of public spaces.”

The survey found that conduct which might have been considered rude in the past is now gaining acceptance.

Two-thirds of cell owners frequently or occasionally look up information about where they are going or how to get there, and 70 percent coordinate get-togethers with others using their device.

Some 23 percent of cellphone owners say that when they are in public spaces they use their device to avoid interacting with others.

The survey found younger adults between the ages of 18 and 29 are most tolerant of public mobile device usage.

Ninety percent of this group said phone use on public transportation is acceptable compared with 54 percent of people 65 and older.

This group is also most likely to use their cellphone in public spaces, the survey found.

But Rainie noted that “Americans of all ages generally trend in the same direction about when it is okay or not to use cells in public settings.”

He said that fully public venues are viewed by all age groups as generally acceptable places to use a phone but that “usage in quiet or more intimate settings is mostly frowned upon by all.”

TOPICS: etiquette, IT, Lifestyle, Smartphone, US
Read Next
Gene study confirms low Vitamin D, multiple sclerosis link
EDITORS' PICK
Current dominant strain of COVID-19 more infectious than original—study
Smart releases Hyun Bin’s second TVC
EuroMillions Superdraw: A lottery draw unlike any other is coming to the Philippines
‘Justice will be done,’ Duterte assures as he vowed probe on Jolo incident to bare ‘truth’
Water remains our saving grace right now
DOLE: Return of OFWs’ remains from Saudi to be ‘delayed,’ deadline moved to ‘early next week’
MOST READ
Duterte tells military: No other president looked at you the way I did
Locsin warns of ‘severest response’ if China’s army drills in SCS ‘spill over’ to PH domain
BREAKING: Duterte signs anti-terror bill into law
Vico: Cleanup of bidding process saved Pasig gov’t P415M
Don't miss out on the latest news and information.