What’s in a billion? Facebook users hit milestone in 1 day 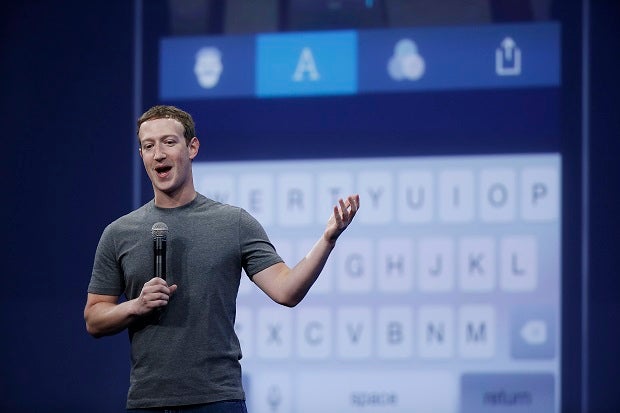 In this March 25, 2015 file photo, Mark Zuckerberg talks about the Messenger app during the Facebook F8 Developer Conference in San Francisco. For the first time, a billion people used Facebook in a single day on Monday, Aug. 24, 2015. Zuckerberg marked the occasion with a post on his Facebook page, saying that one out of seven people on Earth logged in to the social network to connect with their friends and family. AP FILE PHOTO

NEW YORK — A billion people logged in to Facebook on a single day this week, marking the first time that many members used the world’s largest online social network in a 24-hour period. The number amounts to one-seventh of the Earth’s population.

Monday’s milestone was mostly symbolic for Facebook, which boasts nearly 1.5 billion users who log in at least once a month. But CEO Mark Zuckerberg, who founded the network in his Harvard dorm room 11 years ago, reflected on the occasion with a post.

“‘I’m so proud of our community for the progress we’ve made,” he wrote. “Our community stands for giving every person a voice, for promoting understanding and for including everyone in the opportunities of our modern world.”

Facebook achieved 1 billion overall users in 2012, but this week’s milestone is perhaps more significant. It means the social network has become an essential service in many of our lives, a sort of online connective tissue that binds us to friends, family and even strangers who find themselves in similar circumstances. We need it daily, or more.

Facebook has long sought to connect everyone in the world with its service. A lofty goal, it’s not so different from the three other tech superpowers that are changing commerce, communication and worming their way into every part of our lives. Apple has its gadgets, Amazon delivers our every physical need and Google, well, when was the last time you went a day without Google?

(Google, incidentally, receives an average of 100 billion search requests per day, which makes it likely that more than a billion people use it daily.)

Most of the billion people who logged in to Facebook on Monday were outside the US and Canada. Of Facebook’s overall users, more than 83 percent come from other countries. In a video posted Thursday, Sheryl Sandberg, Facebook’s chief operating officer, mulled what a billion really means.

“Look closely, and you’ll see more than a number,” she said in the video, a montage showing Facebook users’ photos, posts and videos from all over the world. “It’s moms and little brothers and cousins and cousins of cousins. There’s Sam, Dante, Ingrid and Lawrence. It’s camping trips, religion … there’s likes, loves and unfortunately still some hate. Look past the number. You’ll find friendships.”

As it grows, Facebook’s next billions of members will likely come from outside the US, from India, South America, Africa and perhaps even China, where the site is officially blocked.

To help expand its flock, Facebook has been working to make its service easier to use on the basic, old-fashioned phones used in many parts of the world. It’s also working to get Internet access to the roughly two-thirds of the world’s population that is not yet connected — or about 5 billion people.

Two years ago, Facebook launched Internet.org, a partnership with other tech giants that aims to improve Internet connectivity around the world. The group’s plans include developing cheaper smartphones and tools that would reduce the amount of data required to run apps, as well as working with telecommunications companies to provide basic, free Internet services. The effort has received some criticism for putting Facebook in the position of Internet “gatekeeper,” deciding what sites people can access and going against the spirit of “net neutrality.”

“Net neutrality ensures network operators don’t discriminate by limiting access to services you want to use. It’s an essential part of the open Internet, and we are fully committed to it,” he wrote in April. “To give more people access to the Internet, it is useful to offer some service for free. If someone can’t afford to pay for connectivity, it is always better to have some access than none at all.”