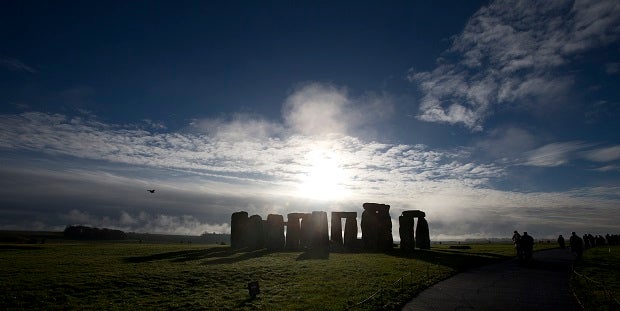 In this Tuesday Dec. 17, 2013 file photo, visitors take photographs of the world heritage site of Stonehenge, England. Researchers have discovered evidence of standing stones believed to be the remnants of a major prehistoric stone monument near the Stonehenge ruins. University of Bradford researchers said Monday Sept. 7, 2015 the monument is thought to have been built around 4,500 years ago. AP Photo

Up to 90 standing stones, some originally measuring 4.5 meters (15 feet) and dating back some 4,500 years, may have been buried for millennia under a bank of earth, they said.

The discovery was made at Durrington Walls—a so-called “superhenge” located less than three kilometers (1.8 miles) from Stonehenge—thanks to hi-tech sensors, they said.

The site may have been used in neolithic times for rituals or as some kind of arena.

“Durrington Walls is an immense monument and up until this point we thought it was merely a large bank and ditched enclosure, but underneath that massive monument is another monument,” Vincent Gaffney, of the University of Bradford, told the BBC.

The discovery was made by the Stonehenge Hidden Landscapes Project, a collaboration between the University of Birmingham and the Vienna-based Ludwig Boltzmann Institute for Archaeological Prospection and Virtual Archaeology (LBI ArchPro).

The newly discovered stones, which have yet to be excavated, are thought to have been toppled over, with the bank of the later Durrington Walls henge built over them.

The monument, which lies in the Stonehenge World Heritage Site, is one of the largest known henges—a circle of stone or wooden uprights—ever found.

It measures 500 m (yards) across and more than 1.5 km in circumference.

Surrounded by a 17.6-m wide ditch and a bank around 1-m high, the site has long mystified archaeologists as one side is straight and the other curved.

Now ground penetrating radar has revealed that the straight edge in fact sits on top of a “C-shaped” monument, which may have been used as a site for rituals or an arena for gatherings, researchers said.

Project initiator Wolfgang Neubauer, director of the LBI ArchPro, described the discovery as a “very important and fantastic finding” and said the monument could originally have comprised up to 200 stones.

“The missing stones might be the stone material which was used later on to build Stonehenge,” he explained, adding that those left in place were probably broken during attempts to move them.

Although none of the stones have yet been excavated, archaeologists believe they may be locally sourced stones similar to a single standing stone, known as “The Cuckoo Stone,” in an adjacent field.

The earthwork enclosure at Durrington Walls was built about a century after Stonehenge, a ring of standing stones believed to have been erected between 3,000 and 2,000 BC.

Archeologists say the new stone row could date back to the same period, or even earlier.

“This discovery of a major new stone monument, which has been preserved to a remarkable extent, has significant implications for our understanding of Stonehenge and its landscape setting,” said Gaffney.

“Not only does this new evidence demonstrate a completely unexpected phase of monumental architecture at one of the greatest ceremonial sites in prehistoric Europe, the new stone row could well be contemporary with the famous Stonehenge sarsen circle or even earlier.”

Nick Snashall, a National Trust archaeologist for the Stonehenge site, said the findings provided “tantalizing evidence” of what lies beneath Durrington Walls.

“The presence of what appear to be stones, surrounding the site of one of the largest Neolithic settlements in Europe adds a whole new chapter to the Stonehenge story,” he said.

TOPICS: archeologists, monument, neolithic, prehistoric, SITE, Stonehenge
Read Next
Google may return to China with Android app shop–report
EDITORS' PICK
Current dominant strain of COVID-19 more infectious than original—study
Smart releases Hyun Bin’s second TVC
EuroMillions Superdraw: A lottery draw unlike any other is coming to the Philippines
‘Justice will be done,’ Duterte assures as he vowed probe on Jolo incident to bare ‘truth’
Water remains our saving grace right now
DOLE: Return of OFWs’ remains from Saudi to be ‘delayed,’ deadline moved to ‘early next week’
MOST READ
Locsin warns of ‘severest response’ if China’s army drills in SCS ‘spill over’ to PH domain
Duterte tells military: No other president looked at you the way I did
BREAKING: Duterte signs anti-terror bill into law
Go apologizes for 5-on-5 game; PBA summons Japeth, ROS rookie
Don't miss out on the latest news and information.