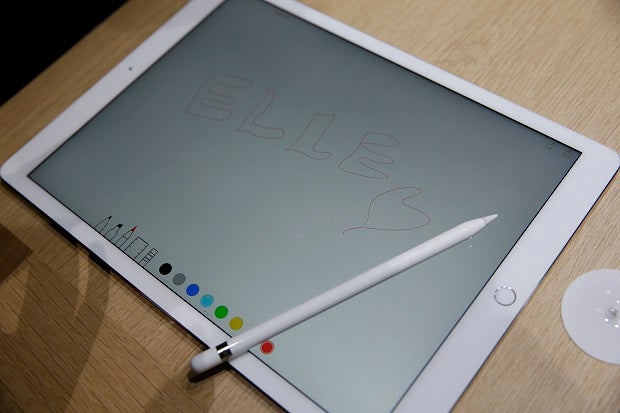 The new Apple Pencil rests on top of the iPad Pro during a product display following an Apple event Wednesday, Sept. 9, 2015, in San Francisco. Apple staked a new claim to the living room on Wednesday, as the maker of iPhones and other hand-held gadgets unveiled an Internet TV system that’s designed as a beachhead for the tech giant’s broader ambitions to deliver a wide range of information, games, music and video to the home. AP Photo

“Overall, I don’t think it is going to push the needle for Apple in a good or a bad direction. These are great devices and cool features.”

Apple shares ended the official trading day down slightly less than two percent at $110.15, and danced around that price in after-market trades.

“If you are an investor, you are probably not that excited about today because you didn’t hear numbers and these features won’t impact sales this quarter,” Blau said.

Apple introduced two updated iPhones to build on the success of large-screen handsets introduced last year that have dominated the high-end smartphone market.

The iPhone 6S and 6S Plus have the same overall dimensions as the previous versions, but with new technologies under the hood.

One of the key new features is called “3D touch,” which responds to pressure exerted on the screen to allow users to look inside messages and applications.

“Apple has performed the ultimate conjuring trick: Change everything about the iPhone, but make it look almost identical to the old model,” IHS Technology said in a posted analysis.

By responding to sensing pressure, the phones enable users to dip in and out of content without losing their place.

“It will further refine our use of touch as a main user interface,” Blau said.

The 6S has the 4.7-inch (about 12-centimeter) display of its predecessor and the 6S Plus—which updates one of the more popular handsets in the “phablet category”—has the same 5.5-inch screen.

But the devices have more powerful processors that allow for improved graphics, harder glass and a new aluminum body. Pricing will be kept at the same levels as the earlier versions.

For those buying without carrier subsidies, Apple will sell the devices on a 24-month installment plan at $27 per month for the $650 iPhone 6S and $31 for the 6S Plus, making the price nearly $750.

The new iPad Pro has the power and capabilities to replace a laptop computer, Apple said. It had aspects reminiscent of Microsoft Surface Pro tablets, such as covers that double as keyboards.

Apple chief executive Tim Cook called the device “the biggest news in iPad since the iPad.”

The new tablet with a 12.9-inch display also includes a detachable keyboard and stylus, sold separately.

According to Apple senior vice president Phil Schiller, the device features “desktop-class performance” and operates faster than 80 percent of portable PCs that shipped in the last 12 months.

The new iPad will be available in November starting at $799.

The iPad Pro stylus, called Apple Pencil, was designed for high-precision illustration and 3D design applications. Apple Pencil will be sold for $99 more and the keyboard for $169.

Avi Greengart at the research firm Current Analysis tweeted that the new tablets “are aimed directly at enterprises. That’s a long sales cycle, but could finally stop (the tablet market’s) sales slide.”

“We believe the future of television is apps,” Cook said.

Apple released a software kit for outside developers, and showed off early versions of Apple TV applications already being crafted by show streaming services Netflix and Hulu, as well as HBO.

Apple TV has the potential to take the kinds of “casual game” apps popular on mobile devices and put them on television screens, according to analysts.

Ask for something funny

Siri virtual assistant software newly built into Apple TV will allow for natural language searches for shows—for example, by asking for something funny or a certain actor by name.

The new Apple TV will launch in late October at a starting price of $149.

According to the research firm Parks Associates, Roku leads the US market with a 37 percent market share, to 19 percent for Google Chromecast and 17 percent for Apple TV. Amazon’s Fire TV devices have 14 percent.

“For Apple TV to succeed it will have to give people what they already want on a TV: TV shows,” said Forrester analyst James McQuivey.

Apple also said the operating system for its Apple Watch, watchOS 2, would be made available as a free update September 16.

The company offered no sales figures but Cook said customers “love using Apple Watch,” and that user satisfaction “is an incredible 97 percent.”

The latest iteration of the Watch, created with French fashion house Hermes, features a hand-stitched leather band and starts at $1,100.

US stocks sink as Apple drops after products launch

‘Breaking News’: Apple will not move its China plants to PH