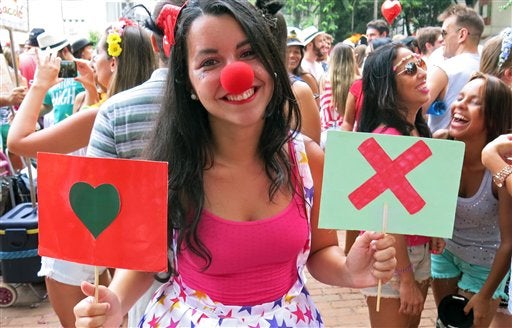 “I used Lovestruck, OKCupid and Tinder. On OKCupid, there were always guys sending me weird messages. I paid for Lovestruck and went out on two dates, but there was no chemistry,” said Tang—now 30 and still single.

She found someone she liked on Tinder and they dated for three weeks. He was visiting Hong Kong at the time and had been trying to find new friends on Tinder. But the relationship did not work out.

Tang quit Tinder after about a year. “It’s quite boring,” she said. “I had to constantly swipe and look for possible matches and, even if we both liked each other, the conversation was always the same and meaningless, with a boring start and boring exchanges.”

Tinder is among the hottest dating apps nowadays, with an estimated 50 million active users worldwide.

Users get a limited number of matches sent to them every 12 hours and can swipe right to indicate they like the proposed match or left to reject. A private chatroom will be initiated if a mutual like happens.

In April, Tang followed a friend’s recommendation and started using Coffee Meets Bagel, which only delivers one “high quality” match—the “bagel”—each day. The app was founded in New York three years ago, and launched in Hong Kong last March after becoming hugely popular in the US.

Tang said she trusts the app more, as it refers to mutual friends on Facebook in proposing matches and constantly learns users’ preferences and alters the algorithm accordingly.

She went out on two dates recently with men she met through the app. “So far it’s not bad, but I have to wait and see,” she said.

Dawoon Kang, one of the three founders of Coffee Meets Bagel, feels the dating app market has become a frustrating place.

“Millennials are extremely busy, and no one wants to dedicate time to meeting some strangers—and if the date doesn’t work out, you feel like you’ve wasted a lot of time,” she said.

“Very often you spend a lot of time swiping on apps that never end up in fruition, which is an actual meet-up.”

In its three years, Coffee Meets Bagel claims to have facilitated over 25 million matches in the US, with more than 20,000 couples starting a relationship and 200 getting married or engaged. It also generated nearly 10,000 downloads in Hong Kong in three months.

Another app with a similar “one match per day” approach, LunchClick, made its Hong Kong debut in June.

Its Singapore-based founder and a matchmaker, Violet Lim, set up matchmaking company Lunch Actually in 2004 in Singapore, and her company is now Asia’s premier dating agency.

Unlike Coffee Meets Bagel, there is no chat function on LunchClick. Instead, if both sides click to “like” each other, they will be interacting through a Q&A session, choosing from a question bank with more than 100 multiple-choice queries covering topics such as values, opinions, interests and aspirations.

The app has so far paired over 15,000 singles in Hong Kong, who have exchanged more than 32,000 Q&As, Lim said. “My experience in the matchmaking industry tells me singles don’t need chatting. They need to meet. So we designed an app that’s only for meeting. Chatting will never reduce the time before the final meet-up but only increase it,” she said.

Specially developed computer algorithms at the foundation of both apps help propose matches for users.

Studies by Coffee Meets Bagel in the US have found that if the two sides share mutual friends on Facebook, there is a 37 percent greater likelihood that they will end up meeting.

Its research also shows that Coffee Meets Bagel users based in Hong Kong have as many as 768 Faceook friends on average, compared to a global average of over 200. Other factors such as the member’s age, education level, religious and other preferences are also taken into account in Coffee Meets Bagel’s algorithm.

For LunchClick, it is mutual values that matter most. Lim said the matchmaking industry is never about just matching interests or ensuring business complementarity, or working on the principles of opposites attract—such as matching introverts with extroverts.

Instead, it is similar perspectives on issues such as family and money that lead to a happy and lasting relationship or marriage, she noted.

The computer algorithms are constantly modified and updated based on user feedback and reactions toward proposed matches.

This way, the apps are more likely to get a precise idea of individual preferences and pick matches based on the choices they actually make instead of what users may say they like.

However, can big data really help people find their significant other on a mobile platform? Denise Tang Tse-shang, assistant professor of Sociology at the University of Hong Kong, pointed out that in the final analysis computers can never make decisions for people.

“Technology has enabled us to chat with strangers online without any emotional boundaries. But speaking of meet-ups, there should be no direct judgment on whether different apps are effective or not—as the users themselves will have to make the final decision while taking into account any possible risks,” she said.

That is probably why both apps have labeled themselves as “female-centric,” and they use multiple approaches to filter out fake accounts by verifying every new registration case by case.

Hong Kong’s lopsided gender ratio of 858 men to 1,000 women might have had an impact on the dating dynamics of the city, with Coffee Meets Bagel’s survey revealing 62 percent of women find dating in Hong Kong difficult, compared to only 45 percent of men.

It also found that in general users of both genders in Hong Kong will like one out of three matches they get.

LunchClick, on the other hand, spotted that while there are more women customers for Lunch Actually’s offline services, the app ended up showing a reversed gender split.

“Several types of dating services are about to be eliminated, as there will be greater proliferation of quality matchmaking. One is the subscription model. There is no reason to pay 60 dollars a month for a service that doesn’t guarantee any results,” Kang forecast.

“The human relationship between men and women is far more complicated and unpredictable than we think,” said Rachael Chan, founder of Rachael and Smith Matchmakers, a local agency.

“Those who claim to have no time to look for dates, and those who are truly buried in their work, which leads to their remaining single, won’t spend one hour on apps after they get off work.”

Either way, love is not found in a rush. Wendy Tang said she would rather spend more time on having a healthy work-life balance, which she considers the most effective way to meet new faces. To her, apps are no more than just another ordinary platform to find love.

TOPICS: click, love, matchmaking, Relationship, romance, Social Media, technology
Read Next
‘Mario,’ still super after 30 years
EDITORS' PICK
Current dominant strain of COVID-19 more infectious than original—study
Smart releases Hyun Bin’s second TVC
EuroMillions Superdraw: A lottery draw unlike any other is coming to the Philippines
‘Justice will be done,’ Duterte assures as he vowed probe on Jolo incident to bare ‘truth’
Water remains our saving grace right now
DOLE: Return of OFWs’ remains from Saudi to be ‘delayed,’ deadline moved to ‘early next week’
MOST READ
Locsin warns of ‘severest response’ if China’s army drills in SCS ‘spill over’ to PH domain
Duterte tells military: No other president looked at you the way I did
BREAKING: Duterte signs anti-terror bill into law
Go apologizes for 5-on-5 game; PBA summons Japeth, ROS rookie
Don't miss out on the latest news and information.