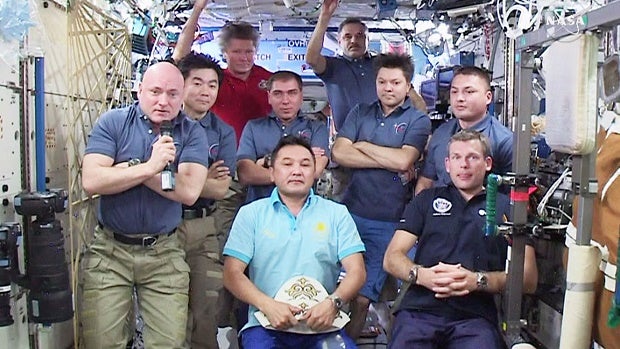 WASHINGTON, United States—Halfway into a year in space—the longest ever attempted at the International Space Station—American astronaut Scott Kelly said Monday he misses fresh air but is adapting well.

Kelly and Russian cosmonaut Mikhail Kornienko agreed to double the length of a typical astronaut’s mission at the ISS in order to help the world’s space agencies study how long-term space travel affects the human body and mind.

Such research is viewed as invaluable as NASA aims to send humans to Mars in the 2030s, but it is not easy for the two men, who have been circling the Earth since late March.

“I feel pretty good overall,” Kelly said in an interview from the ISS, broadcast on NASA television. Kornienko did not participate in the event, which was organized by the National Press Club in the US capital.

“What I am looking most forward to is just getting to the end of it with as much energy and enthusiasm as I had at the beginning,” added Kelly, whose participation in the study could be particularly useful since his health can be compared to that of his twin brother Mark, a retired astronaut participating in the study from Earth.

Asked what he missed most about Earth, Kelly said “being with people you care about, family and friends, just going outside.”

“This is a very closed environment, you can never leave,” he added.

“The lighting is pretty much the same, the smell … everything is the same. Even most prisoners can get out but we cannot.”

Kelly and Kornienko’s mission is the longest at the ISS, which was first visited by astronauts in the year 2000.

But the record for the longest time spent in space is held by Russia’s Valeri Polyakov, who stayed at the Mir Space Station for 14 months in the mid-1990s.

Living in space can have odd effects on the body, said Kelly, who has been to the ISS multiple times and previously spent a six-month stint there, the typical mission length.

“We do not really use the bottom of our feet much,” he said.

“After five months you have baby feet.”

But he also said he is better able to do certain tasks now than he was at the beginning.

“My ability to move around is really improved over time,” said Kelly.

“You just get more comfortable,” he added.

“Your clarity of thought is greater, your ability to focus. I found that the adaptation has not stopped, and it will be interesting to see six months from now.”

There is plenty that scientists will not know until long after the experiment is over, including how radiation in space may have affected Kelly and Kornienko, and how Kelly’s long-term health compares to his twin brother Mark.

Living in space has been shown to lead to bone loss and vision problems in astronauts, and the pair is being carefully studied with state-of-the-art equipment.

But with any trip to Mars likely to last months or years, Kelly said he hopes the ISS research will show that humans are able to adjust and thrive during extended stays in space.

“I think over the long term it won’t be an issue,” Kelly said.

“We as a species, throughout evolution, we have shown we are very adaptable.”