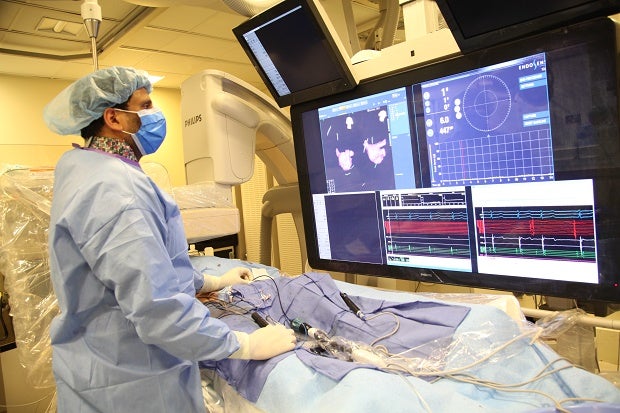 In this undated image provided on Saturday Aug. 29, 2015 by Mount Sinai Hospital in New York shows Dr Vivek Reddy as he checks the screen while doing a surgery to implant the new tiny wireless pacemaker at the Mount Sinai hospital in New York . Unlike traditional pacemakers  which need a generator and wires and are implanted via surgery  the new pacemaker is a wireless tiny tube that can be attached to the right side of the heart using a catheter inserted through the leg. AP

NEW YORK—Medtronic said Monday that it has been cleared to market a heart defibrillator implant that can be safely used in an MRI scanner.

Medtronic’s Evera MRI SureScan is designated “MR conditional,” which means having an MRI with one is not known to pose a hazard to patients.

The device is implanted in a patient’s chest to treat dangerous rapid heartbeats. It is intended for patients at risk of sudden cardiac arrest.

Medtronic said patients who have an Evera MRI SureScan device implanted in their bodies can receive MRI scans on any part of the body without positioning restrictions.

The MR conditional designation only applies when the implant is used with a specific wire Medtronic developed.

Evera MRI SureScan will be available in September.

The powerful magnets in MRI machines can interfere with heart implants by making them speed up or making component turn or overheat, so safety regulators have long recommended that patients avoid MRI scans.

Medtronic says that is a problem because about one-third of patients with the defibrillator implants, which are known as ICDs, will need an MRI within four years of having the device implanted.

The company said it has changed some software and hardware inside its titanium Evera implant to reduce those risks.

Dr. David Steinhaus, the medical director of Medtronic’s cardiac rhythm and heart failure business, said medical device companies are focusing on making their devices safe for use in MRI machines because the scans are becoming more common.

“With MRIs becoming way more prominent, becoming the preferred mode of imaging for certain kinds of disease … more and more device makers are concentrating on trying to make things that are MRI compatible,” he said.

The Food and Drug Administration said it is working to encourage the development of MRI-compatible devices.

Medtronic and other companies have sold MRI-safe pacemakers for several years.

However, pacemakers are more common than ICDs, and Medtronic said developing an ICD was more complicated.

Pacemakers are used to treat slow heartbeats and they deliver a steady stream of electrical pulses to keep a patient’s heart beating normally.

ICDs are more complex: They contain pacemakers and additional systems that are used to sense irregular heartbeats and deliver electrical pulses or shocks to return the heart to a normal rhythm.

Medtronic said in May that a clinical trial showed MRI scans did not affect the device’s ability to detect dangerous heart rhythms and respond to them.

Medtronic PLC had been based in Minnesota, but relocated to Ireland in January after it bought drug and medical device maker Covidien for $42.9 billion. Its shares fell $1.17 to $68.73 on Monday.