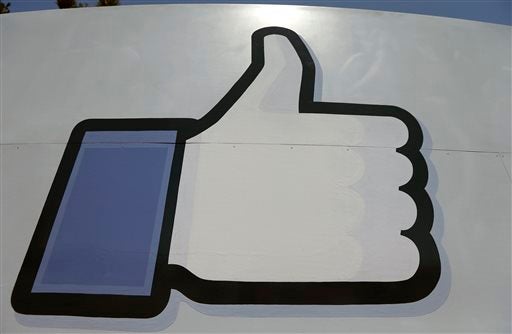 This June 11, 2014 file photo shows Facebook’s “like” symbol at the entrance to the company’s campus in Menlo Park, California. Facebook is constantly updating its service, adding new features or tweaking old ones, and a lot of stuff can slip through the cracks even if you are scrolling through your friends updates several times a day. AP

“We’re excited to take it a step further with 360-degree video.”

Synched rings cameras are used to capture video in a way that lets viewers virtually look around as if they are in the middle of a scene.

In desktop computer browsers, changing angles can be done using on-screen cursors. On mobile devices, shifting perspectives can be done by dragging fingers or just turning handsets, according to Saba.

“You’ll be able to hold up your phone and the 360-degree video will follow you as you turn, looking around, to experience things from all over the world like never before,” Saba said.

Disney and Lucasfilm will debut a 360-degree video focused on its upcoming film “Star Wars: The Force Awakens,” Saba said.

The immersive new feature being added to News Feed was being rolled out to Web browser and mobile devices powered by Google-backed Android operating systems. Facebook planned to get it onto hardware powered by Apple iOS software “in the coming months.”