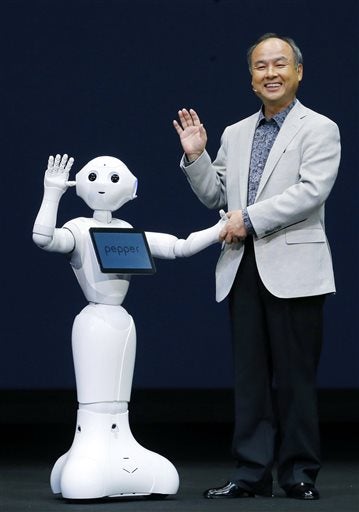 Softbank Corp. President Masayoshi Son, right, and Pepper, a newly developed robot, wave together during a press event in Urayasu, near Tokyo, Thursday, June 5, 2014. The cooing, gesturing humanoid on wheels that can decipher emotions has been unveiled in Japan by billionaire Son who says robots should be tender and make people smile. Son’s mobile phone company said Thursday that the 1.21-meter (3 feet 12 inches) tall robot will go on sale in Japan in February for 198,000 yen ($1,900). Overseas sales plans are under consideration but undecided. AP

TOKYO, Japan—The company behind a chatty Japanese humanoid named Pepper has felt the need to remind customers who purchase the robots not to engage in sex with them.

Mobile phone giant SoftBank, which sells the units in Japan, states helpfully in its user agreement: “The policy owner must not perform any sexual act or other indecent behavior.”

The wise-cracking Pepper—who, according to its makers, can read people’s emotions—costs a cool $1,600.

But even for that outlay, SoftBank warned buyers that the pint-sized droid cannot be used outside or to inflict harm on human beings.

Other clauses prohibit using Pepper to send out spam email but the ban on sex with the plastic machine—which stands just 120-centimetres (four feet) and moves on rollers—is the most baffling, causing social media in Japan to light up in amazement.

While SoftBank wants Pepper to behave like a good little robot and not a spicy sex-bot, the fine print is somewhat ambiguous, with some people taking it to mean customers are not barred from physical relations with the droid, just from using it for “improper purposes.”

SoftBank said lewd acts could trigger punitive action, although exactly what kind of punishment offenders faced—and how anyone would ever find out—was not made clear in yet another grey area.

However, a spokesman for the company made clear that tampering with the robot’s software to give it a sexy voice was a definite no-no.

Pepper, also used widely in SoftBank stores to greet customers, went on sale in June for 198,000 yen ($1,640) and the initial shipment of 1,000 units sold out online in one minute.