PARIS—Curious lines running down slopes on the Martian surface may be streaks of super-salty brine, said the latest findings Monday in the scientific quest for extra-terrestrial liquid water, a prerequisite for life.

A team from the United States and France said it found evidence in the lines of “hydrated” salt minerals, which require water for their creation.

These results “strongly support the hypothesis” of liquid water on Mars today, concluded a research paper published in the journal Nature Geoscience.

Astrophysicists have long hypothesized that the seasonal streaks, dubbed “recurring slope lineae” (RSL), may be formed by brine flows on the Red Planet.

The lines, up to a few hundred meters in length and typically under five meters (16 feet) wide, appear on slopes during warm seasons, lengthen, then fade as they cool.

But spacecraft images have not been detailed enough to probe what is within the lines—the pixel resolution is coarser than the width of the streaks.

In April, scientists reported in the same journal that perchlorate salts, like the ones in the new study, were “widespread” on the surface of our planetary neighbor and humidity and temperature conditions just right for salty brines to exist.

Perchlorate is highly absorbent and lowers the freezing point of water so that it remains liquid at colder temperatures.

The new study found signs of these same salts in the enigmatic streaks.

“What our paper does is further substantiate that theoretical possibility” of liquid brines on Mars, co-author Lujendra Ojha of the Georgia Institute of Technology in Atlanta told AFP by e-mail. 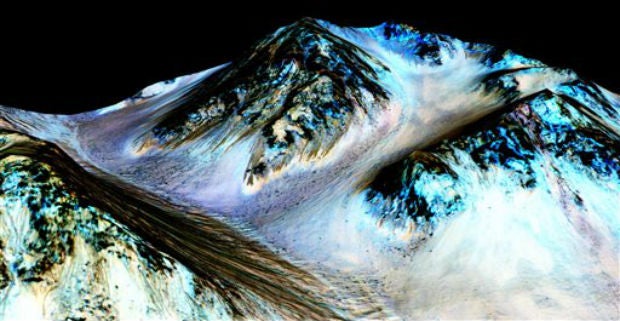 This undated photo provided by NASA and taken by an instrument aboard the agency’s Mars Reconnaissance Orbiter shows dark, narrow, 100-meter-long streaks on the surface of Mars that scientists believe were caused by flowing streams of salty water. Researchers said Monday, Sept. 28, 2015, that the latest observations strongly support the longtime theory that salt water in liquid form flows down certain Martian slopes each summer. NASA/JPL/UNIVERSITY OF ARIZONA VIA AP

The team devised a method to extract more data from individual pixels in images from the CRISM spectrometer instrument on NASA’s Mars Reconnaissance Orbiter, and found details “consistent with the presence of hydrated salt minerals that precipitate (crystallise) from water,” according to a Nature press release.

“The findings strongly suggest a link between the transient streaks on Martian slopes and the flow of liquid brines,” it added.

Asked if the data was unequivocal proof of liquid water on Mars, another of the study authors, Alfred McEwen from the University of Arizona, told AFP: “I would say almost.”

But if there was, it was likely “wet soil, not free water sitting on the surface,” he said by e-mail.

It is widely accepted that the Red Planet once hosted plentiful water in liquid form, and still has water today, albeit frozen in ice underground.

Earlier this year, NASA said almost half of Mars’ northern hemisphere had once been an ocean, reaching depths greater than 1.6 kilometers (one mile).

But 87 percent of the precious substance was lost to space.—Mariette Le Roux