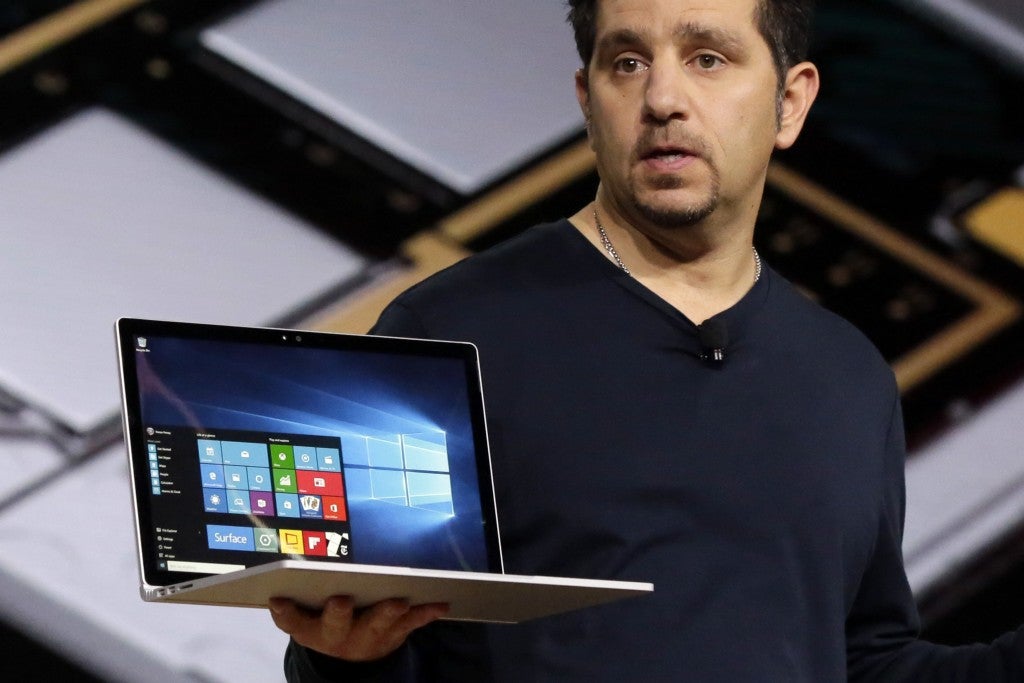 NEW YORK — The success of Microsoft’s fall lineup of devices will ride on the company’s ability to convince people who got free Windows 10 software upgrades this summer to spring for new devices — specifically, Windows devices.

Microsoft Corp. on Tuesday unveiled a new laptop, a tablet, three phones and a fitness tracker meant to keep people tied to its array of online services. Many of the products have impressive hardware features, but they face heavy competition from Apple and Android products.

With the new lineup, Microsoft appears to be targeting professionals, people more likely to have Windows already in their office computers. The Redmond, Washington, company is hoping to build on a successful summer launch of Windows 10, which Microsoft says is now in more than 110 million devices.

“It’s not about the mass market. It’s about the high end of the market,” said Carolina Milanesi, who heads U.S. operations for the Kantar Worldpanel ComTech research group.

In closing a nearly two-hour event in New York, CEO Satya Nadella said the latest devices are part of Microsoft’s vision “to move people from needing Windows to choosing Windows to loving Windows.”

Microsoft for the first time appears capable of achieving that, Milanesi said.

The surprise announcement was a new Surface Book laptop, which comes after Microsoft has been touting its Surface tablets as replacements for laptops. Microsoft says the Surface Book is for scientists, engineers and gamers who need more performance than a tablet. The screen is detachable and becomes a tablet with a clipboard feel while on the go. But unlike Surface tablets with keyboard covers attached magnetically, the Surface Book’s keyboard is core to the device.

Although the new devices are more expensive than Apple’s entry-level MacBook Air laptop and iPad tablet, Microsoft is targeting those who need more horsepower. Apple Inc. is starting to go after those customers, too, with its upcoming iPad Pro, which starts at $799, plus $169 for a physical keyboard. Apple already has a MacBook Pro laptop line, starting at $1,299, for power users.

Surface sales have picked up after a rocky start. Just two years ago, Microsoft wrote down $900 million for losses related to its first-generation Surface RT tablet. In the most recent quarter, revenue from tablets and accessories more than doubled from a year ago to $888 million. Although the Surface still represents a small part of Microsoft’s overall business, it provides a window into the company’s various ad-supported services, including search and maps.

Microsoft also sought to use Tuesday’s event to revive its struggling phone business. Over the summer, the company wrote down $8.4 billion for the value of Nokia’s phone business, which it bought just a year earlier. It also announced 7,800 job cuts in the phone business. The new Lumia 950 and 950 XL are the first high-end Windows phones from Microsoft since February 2014, which was around the time Nadella became CEO and before Microsoft completed its purchase of Nokia.

Microsoft’s Windows operating system has a tiny market share compared with Google Inc.’s Android and Apple’s iOS for iPhones. That means developers tend to focus on making their apps for Android and iPhones first and might not get to Windows at all.

Instead of a “me, too” phone system, Microsoft is touting compatibility with Windows desktops, laptops and tablets. With an optional dock, you can attach a regular monitor, keyboard and mouse and work with apps on the phone just like you would on a Windows 10 desktop. That means you can leave your tablet or laptop at work and have a full desktop experience at home with just the phone. Microsoft is hoping to lure those who use Windows desktops and laptops regularly.

Similar to the Surface, the new phones are aimed at power users who need the flexibility to perform tasks on larger screens, along with compatibility with Windows apps they might use at work.

The new phones start at $549 and will be available in November. Microsoft hasn’t announced the dock’s price. Microsoft also introduced a budget model, the Lumia 550, for $139. These prices do not require two-year service contracts.

Microsoft has done a great job “to at least get Microsoft into the conversation among consumers, (but) this is going to be a long road for Nadella as Microsoft plays major catch-up,” said Daniel H. Ives, an analyst at FBR.

The new Microsoft Band fitness tracker, meanwhile, will now track elevation and work with the company’s Cortana virtual assistant. It will be available for $249 starting Oct. 30.

Microsoft also teased Xbox One games and console bundles and demonstrated its upcoming HoloLens virtual-reality device by showing a “mixed reality” game that combines animation with real-world objects. Attacking robots know how to break through walls and go around furniture. Developers will be able to buy a prototype early next year for $3,000.

The HoloLens represents an opportunity to get a head start in a nascent market. Rival systems are just starting to come out.

The HoloLens “represents a change from the status quo as Nadella goes after this land grab, multi-billion dollar market opportunity,” Ives said.