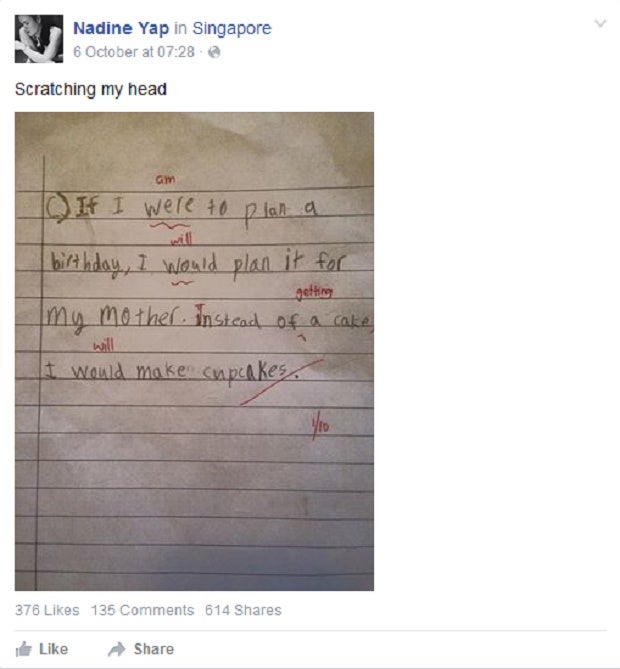 SINGAPORE—A primary 1 pupil’s answer to an English composition assignment has sparked a lively online debate, after a photo of it was shared widely on social media.

The girl’s mother, tech start-up vice-president and Democratic People’s Party member Nadine Yap, had posted the photo of the corrected answer with the caption, “Scratching my head,” on her Facebook page on Tuesday (Oct 6) morning.

It has since been shared over 500 times, attracting more than a hundred comments from netizens.

Yap’s daughter Zoe, who goes to Methodist Girls’ School, appeared to have written a model answer to the question, and Yap was puzzled over the corrections that Zoe’s teacher had made on it.

The question was a stimulus-based conversation consisting of three parts.

Part C asked: “If you are celebrating a family member’s birthday, how do you plan to celebrate it?”

Zoe’s answer was: “If I were to plan a birthday, I would plan it for my mother. Instead of a cake I would make cupcakes.”

The teacher corrected the answer to read: “If I am to plan a birthday, I will plan it for my mother. Instead of getting a cake, I will make cupcakes.”

Majority of the netizens who shared and responded to the post saw nothing wrong with Zoe’s answer and questioned the teacher’s need to correct her grammar.

Several speculated that the teacher may have corrected the answer because the question was posed in the present tense; others took issue with the way the question had been phrased.

Some netizens initially thought that the figure “1/10” written in red at the bottom right of the answer indicated that Zoe had been given a low score of one out of 10, and proceeded to criticize the teacher. But it was actually the date—Oct 1.

Yap, 46, later clarified in comments made on her original post that she had no intention to shame the teacher, and had wanted to gather input from her friends as she was not an expert.

“I’ll talk to Zoe about it and see if she wants to address it with the teacher herself. I will also quietly have a word/e-mail with the teacher and perhaps other relevant folks,” she wrote.