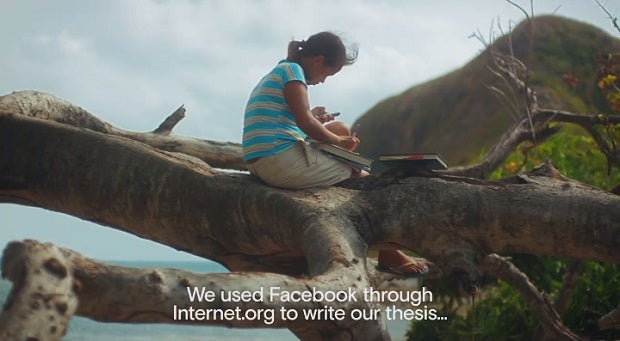 ILOILO CITY—The young woman from Culasi town in Antique province, who was subject of a video posted by Facebook founder and chief executive officer Mark Zuckerberg, is elated over becoming an online sensation.

“I’m having goosebumps. I still cannot believe it,” Riza Mae Tachado told the INQUIRER in a telephone interview from Mararison Island in Culasi.

Tachado, 24, said she did not expect that the video would be posted by Zuckerberg on his Facebook page.

“I’m just an islander. It feels like graduating again,” she said.

The video that runs for a minute and eleven seconds shows how the Facebook application Internet.org helped Tachado earn a diploma. Internet.org allows free browsing of popular websites.

“This is an amazing story about Riza — a young woman on a small island where the only job for women was collecting seashells, yet she used Internet.org to earn a degree in computer science,” Zuckerberg said in his post.

“Being connected means having opportunity. We’re going to connect the whole world so one day everyone can achieve their full human potential — just like Riza,” he said.

A mother of a three-year-old daughter, Tachado earned a computer science degree from the University of Antique in Tibiao town on the mainland last April.

In the video, Tachado narrated that she lives on an island where the main means of livelihood for women is through shell-gathering.
“But I wanted more for myself,” she said in Filipino with English subtitles.

Unable to leave the island for several weeks due to a storm in 2014, she communicated with her four thesis groupmates through Internet.org which they also used to work on their thesis “Automated Water Billing System of Culasi Water District.”

“I’m proud to be the first in my family to earn a computer science degree,” she said in the video.

Tachado told the INQUIRER that she has been teased by friends and residents of Mararison.

“They tell me that I’m already a celebrity and they want to ask for my autograph,” she said, laughing. CDG