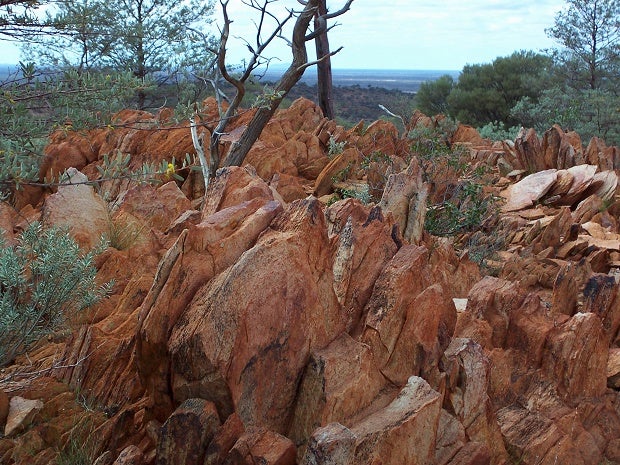 WASHINGTON, United States—Scientists have found fossil-like hints that some kind of life existed on Earth 4.1 billion years ago—when the planet was a mere volcanic toddler. That’s 300 million years earlier for life to pop up than previously thought.

Not only does that change the way scientists thought Earth was like soon after it formed 4.5 billion years ago, but gives them reason to theorize that life itself is more plentiful throughout the universe because it seemed to start up so quickly.

Researchers examined tiny grains of the mineral zircon from western Australia’s Jack Hills and chemically dated them to when Earth was barely 400 million years old. Inside one of the 160 some grains they found what they call a “chemo-fossil” or a certain mix of carbon isotopes, according to a study published Monday in the journal Proceedings of the National Academy of Sciences.

Think of it as “the gooey remains of biotic life or anything more complicated,” said study co-author Mark Harrison, a UCLA geochemistry professor.

There are different types of carbon with different weights. This carbon residue had a higher percentage of the lighter type of carbon, which is what scientists usually find in remnants of life, the same as if your finger decayed, Harrison said. There are rare cases where this particular carbon signature wouldn’t be from life, but they are exceedingly unusual and only in certain situations.

Harrison theorizes that the carbon is from a colony of tiny organisms of some unknown type. Life existing 300 million years earlier than science thought is the most logical and simplest explanation, but “this is not smoking gun evidence,” Harrison said.

The common thinking of early volcanic Earth is that it was too molten and there was not enough liquid water for life to take hold this early. But, Harrison said, there’s no physical evidence for this theory. What the zircon shows is “the Earth by 4.1, 4.2 billion years ago was basically behaving like it is today.”

“This is what transformative science is all about,” said Stephen Mojzsis, a University of Colorado scientist who wasn’t part of the research. “”If life is responsible for these signatures, it arrives fast and early.”

“If life arose relatively quickly on Earth,” Hedges wrote in an email, “then it could be common in the universe.”