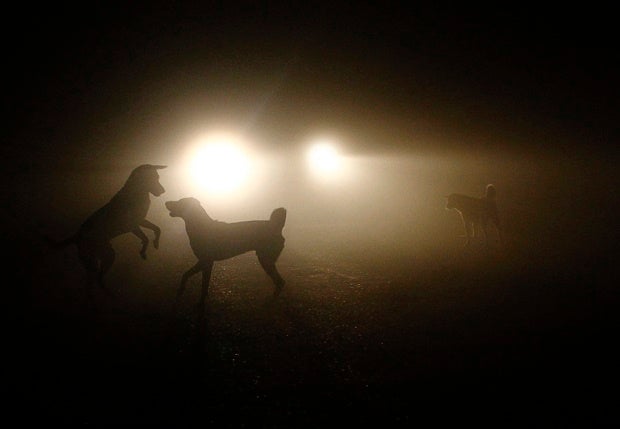 In this Saturday, Jan. 14, 2012 file photo, dogs play on a street in Lumbini, believed to be the birthplace of Buddha, southwest of Katmandu, Nepal. In a paper released Monday, Oct. 19, 2015 in the Proceedings of the National Academy of Sciences, researchers say man’s best friend may have evolved somewhere near what is now Nepal and Mongolia. AP Photo

Dogs evolved from Eurasian gray wolves at least 15,000 years ago, but just where and how they made the historical leap from roving in packs to sitting before human masters has been a matter of debate.

Aiming to resolve a long-standing mystery about where dogs were first domesticated, the study in the Proceedings of the National Academy of Sciences described itself as the “largest-ever survey of worldwide canine genetic diversity.”

The team, led by Adam Boyko at Cornell University, analyzed more than 185,800 genetic markers in some than 4,600 purebred dogs of 165 breeds, along with more than 540 village dogs from 38 countries.

The analysis “suggests that dogs were likely domesticated in Central Asia, plausibly around modern-day Nepal and Mongolia,” said the study.

“Domestic dogs may have originated in Central Asia and spread to East Asia and beyond.”

Some archaeologists have long believed Central Asia was a likely origin for domestication of dogs, but genetic studies have been lacking.

Still, the study cautioned “we cannot rule out the possibility that dogs were domesticated elsewhere and subsequently, either through migration or a separate domestication event.”

More study is needed to confirm the findings, and to determine whether these early dogs were just scavenging scraps from hunter-gatherers, or if they were assisting in the hunts.