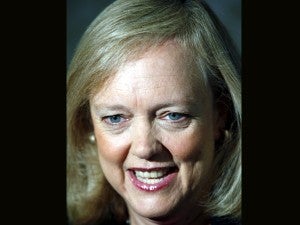 Whitman, 55, stepped down in 2008 at eBay, the Internet auction giant, and last year made an unsuccessful run to replace Arnold Schwarzenegger as California governor, losing to Democratic veteran Jerry Brown.

“We are fortunate to have someone of Meg Whitman’s caliber and experience step up to lead HP,” said Ray Lane, who was named executive chairman of the computer giant.

“We are at a critical moment and we need renewed leadership to successfully implement. Meg is a technology visionary with a proven track record of execution.”

“These leadership appointments are effective immediately and follow the decision that Leo Apotheker step down as president and chief executive officer and resign as a director of the company,” the California group said.

In the statement Whitman said: “I am honored and excited to lead HP. I believe HP matters – it matters to Silicon Valley, California, the country and the world.”

The shakeup comes with HP struggling for direction despite its leadership in the PC business.

Katy Huberty, an analyst at Morgan Stanley, said the change was “a step towards regaining credibility with investors” but warned that “the path to a full recovery of investors’ faith in management and the company’s earnings power will take several quarters, if not longer.”

She said Whitman “brings strong technology industry relationships and leadership experience at a fast growing technology company but will need to prove to investors that she can make similar smart strategic decisions while running a much larger, more complex business” than at eBay,

Apotheker, a veteran of German business software giant SAP, took over HP in November and has been refocusing the company on software and cloud services – offering applications and storing data services over the Internet.

But HP shares have fallen more than 40 percent since Apotheker replaced Mark Hurd, who resigned following a sexual harassment accusation.

HP announced on August 18 it was exploring a spin-off of its PC unit and buying British enterprise software company Autonomy for $10.24 billion as it refocuses on software and technology solutions.

In a further move away from the consumer space, HP said that it was stopping production of its TouchPad tablet computer, its rival to Apple’s iPad, and phones based on the webOS mobile operating system acquired from Palm last year for $1.2 billion.

HP began laying off employees in its webOS unit on Tuesday.

Analyst Rob Enderle of Enderle Group in Silicon Valley said a key to the shakeup is that Ray Lane will be “a chairman with authority.”

Lane “is the guy running HP but doesn’t want to do it full time so he brought in a more traditional CEO. Now, we have a CEO who is in effect a subordinate to the chairman.

“Whitman can take orders… With a strong leader on top of her I actually think this might be able to work.”