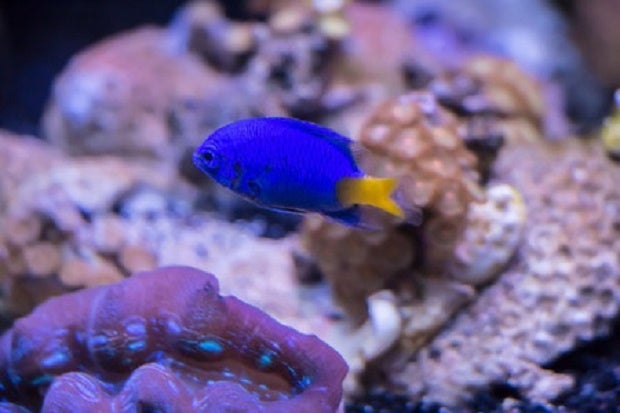 SYDNEY, Australia—Distressed fish caught by predators emit a cry for help to attract other carnivores so they can escape during the ensuing chaos, Australian scientists said Thursday.

While researchers had discovered that fish emit a chemical substance found in their skin when injured to alert others nearby of the dangers, they did not know whether the distress call also benefited the captured prey.

“Within a minute (of the chemical alarm being emitted), you get this aggregation of little predators coming in,” the study’s co-author Mark McCormick of James Cook University told AFP, adding that most fish displayed similar behaviour.

“For them, it’s like somebody ringing a dinner bell. So other predators swoop in… and start chasing the predator that first caught the little prey fish and in doing so, disrupt the initial predator.

“The inital predator ends up 40 percent of the time, we found, dropping the prey and the prey swims off and survives.”

The research, published in the journal Proceedings of the Royal Society B, studied damselfish—a small, primarily tropical marine species—that have similar characteristics to larger, more commercially important fish such as coral trout and snapper.

“You can see how that (call for help) would have developed and how, because of the benefit of attracting other predators, that alarm-cue signalling would be maintained in the population of prey because it’s so advantageous,” McCormick said.

“Lo and behold, who comes to save the day but other dangerous predators.”

The scientists said the next step would be to expand the research to see how fishes’ distress calls were affected by damaged reefs.

“When reefs degrade… in some species, the chemical cues are quite disrupted. The environment ends up modifying or masking those chemical alarm cues so they can no longer be used in the same way,” said McCormick, who is based at the university’s Centre of Excellence for Coral Reef Studies.

“It means that the fundamental way that predators interact with prey, and vice versa, will change.”

TOPICS: Australia, Environment, fish, Science
Read Next
Google’s Internet-beaming balloons to take off in Indonesia
EDITORS' PICK
LIST: What to expect in areas under GCQ, MGCQ
PNP to maintain checkpoints during GCQ to ensure compliance to health protocols
Notice of 2020 regular meeting of stockholders June 18, 2020
DOTr bares 2 phases of public transport revival in GCQ areas
SM prepares for ‘safe malling’
Leveling up your ‘lutong bahay’ with the kitchen companion you never knew you needed
MOST READ
LIST: What to expect in areas under GCQ, MGCQ
Duterte approves Metro Manila’s shift to GCQ starting June 1
DOH explains: Only 109 of record-high 539 COVID-19 patients were ‘fresh cases’
OFW back in Leyte hometown but tests positive for coronavirus
Don't miss out on the latest news and information.