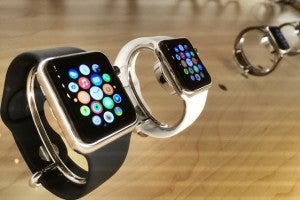 It’s probably fair to say that wearable technology was initially something of a letdown after the below-par launch and reception of Google Glass, but the past couple of years have seen giant leaps in the industry and the public is beginning to respond.

As well as the launch of wearable devices from major names such as Samsung, HTC, Sony and LG, and the continued improvements in the world of virtual reality headsets, the Apple Watch has opened the doors to a whole new generation of gaming.

While there is still some way to go until wearable technology is where the big brands want it, the progress being made has resulted in significant investment from the biggest names in the industry.

Smartphones have paved the way for wearable technology, taking advantage of the smaller, faster and more powerful mobile processors. As well as allowing users to access the Internet from their phones, mobile technology has given birth to the app.

Whether it’s updating your Facebook profile from the beach, watching videos on YouTube, playing roulette at an online casinos such as 32Red or checking up on the latest news on the BBC, apps are now as popular as they are common.

The gaming world wasn’t slow in making the most of the growth in app technology, with some of the biggest names in the industry jumping aboard in order to allow smartphone users to play their favourite games from their handheld devices.

In the world of online casinos, developers Microgaming were quick to adapt to mobile technology, allowing betting fans to play their favorite games from wherever they are. The company, which produces games for the most popular names in the industry, from 32Red to Betway, has been on the forefront of online gaming technology.

Microgaming has truly embraced the changing technology, developing the first ever five-reel smartwatch slot game app, hinting that it might only be a matter of time before the major players in the online casino arena are accessible through the Apple Watch.

The unveiling of the Apple Watch lived up to much of the hype, and wearable technology has been taken to another level. While smartwatches’ main use during this relatively early stage is for communication and activity tracking, catching up on emails, taking phone calls, updating social media or keeping a record on steps taken in a day, the ever-evolving technology has already seen a number of gaming giants adapt their products to be able to be accessed from smartwatches.

It remains to be seen how far the likes of Apple Watch are going to be able to take gaming, considering the size of the screen and current basic, albeit impressive, functions. But with so much investment being made into the growth of the technology, especially from developers with the financial power of Apple behind them, there is plenty of reason to feel as though smartwatch gaming will break new ground in the industry over the coming years.

The return of Virtual Reality

The real success story of wearable technology gaming has been Virtual Reality. Despite a host of unsuccessful versions of the technology over the years, it wasn’t until the success of Oculus Rift before the public really got a product that was genuinely worth getting excited about. As well as creating a headset that doesn’t feel as though you have a decent-sized family car strapped to your face, Oculus Rift has taking gaming to new heights, introducing a host of fantastic games that have made the most of the technology.

From the likes of horror games such as the terrifying Alone!, to classic shooters in the shape of Crashland, Virtual Reality gaming has really picked up the wearable technology ball and ran with it. For a technology that has promised big things for so many years, it’s something of a relief that Oculus Rift have answered a lot of gaming fans’ dreams and delivered a product that not only offers as realistic virtual experience than anything we’ve ever seen, but also the potential to break new ground as we further explore the possibilities of Virtual Reality.